Most ultralight aircraft (officially: “ultralight vehicles”) are rather simple constructions. They must be to stay within the tight constraints of a 254-pound maximum empty weight.*

Corsair photographed in flight by Fliegermagazin.

That’s not a negative comment about them. Actually, it’s the opposite.

To build a flying airplane that weighs less than the engine alone on a Light-Sport Aircraft, a designer has to be unusually clever.

All aircraft are constrained in weight by the laws of physics. Ultralights are further constrained by regulation.

A key way to keep an aircraft light is to keep it simple. Indeed most 103 ultralights are quite basic. However, as years passed some engineers have found intriguing solutions. I recently wrote about the composite Swan. Why not one using extensive carbon fiber?

German developer Jörg Hollmann took a different approach, one that consumed a few years of effort. 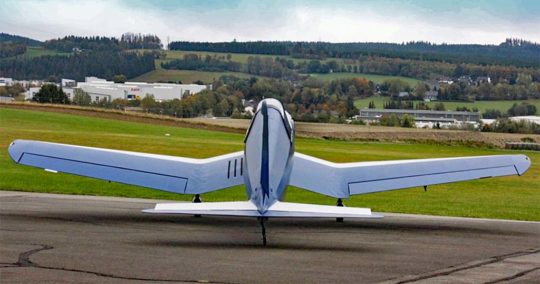 He wanted an aircraft that resembled the famous World War II F4U Corsair fighter. One glance at the nearby photos or the two videos below tells you he did very well. Here’s a bit of history about Corsair’s inverted gull wing.

“Corsair is a newly developed aircraft following the German LTF-L [very light aircraft] regulation,” said Jörg. “As well [Corsair meets] many other national regulations, for example, the British SSDR, the Italian, French, Czech, Polish and even the U.S. FAR Part 103 regulation.” For the latter Jörg said the empty weight, MTOW and speeds are slightly reduced.” In countries where speed is not regulated, Corsair can hit 125 miles per hour. 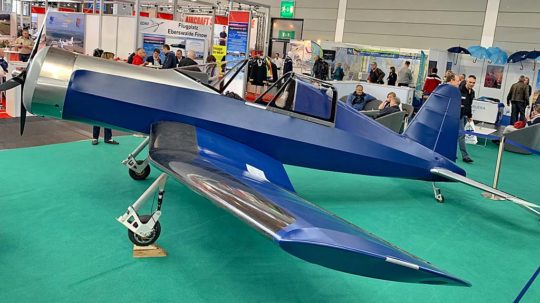 “The general layout — a low inverted gull wing — has been successfully used in several aircraft already,” explained Jörg. “The Chance-Vought Corsair surely is one of the more famous aircraft with this concept.” Jörg notes the main advantages to this configuration are a low interference drag between wing and fuselage as well as an ideal landing gear position, “which allows as well a nearly perfect angle for take off and landings.”

Corsair is adjustable to pilots of many sizes. “The ergonomics have been optimized with the help of our local flying club,” Jörg recalled, “[so Corsair] is suitable for pilots ranging from 5 foot 4 inches to 6 foot 8 inches (1,60 to 2 meters). Cockpit width is 23.6 inches (60 centimeters).

“Our seat is adjustable in four length/height positions and the incline is independently adjustable in 11 positions,” he said (see in video). “Rudder pedals are adjustable as well and the stick has two positions.” In other words a fairly wide range of pilots should fit in Corsair.

Growling Into the Air

In our original, longer video (below) you hear the sound of Corsair’s engine with its distinctive low rumble. Some call it a “bark,” others have said “growl.” 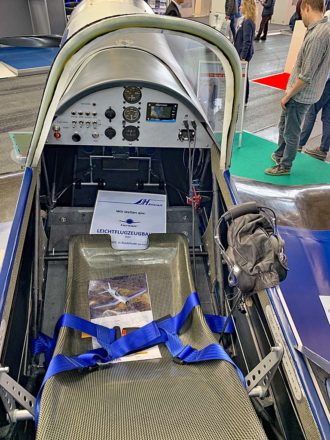 Jörg said, “We selected the Verner Scarlett 3 VW, a four-stroke, three-cylinder radial engine, [which was] purposefully designed as a light aircraft engine.” The Vernor produces 42 horsepower at 2500 rpm using a displacement of 96 cubic inches (1.6 liters).

“The high engine torque allows the use of a rather big and efficient propeller,” observed Jörg, again mimicking design parameters of the F4U Corsair. “We use a ground adjustable 63-inch (1,60 meter) carbon prop that can produce, depending on the blade pitch, up to 220 pounds of static thrust, more than enough for Corsair’s empty weight!”

U.S. importer SportairUSA, well known for their representation of the Zlin Shock Outback and Shock Ultra, is scheduled to receive their first Corsair in September 2020 (though shipping and Customs inspections are less certain due to the virus).

Corsair is not your low priced ultralight option, but with an all carbon fiber tube primary structure, I assume most readers are well aware this is a more costly production. SportairUSA may price Corsair in euros (€75,000) due to fluctuating currency at this time but the dollar equivalent is around $89,000 at today’s exchange rate. This is merely an estimate; please check with SportairUSA boss Bill Canino for details. 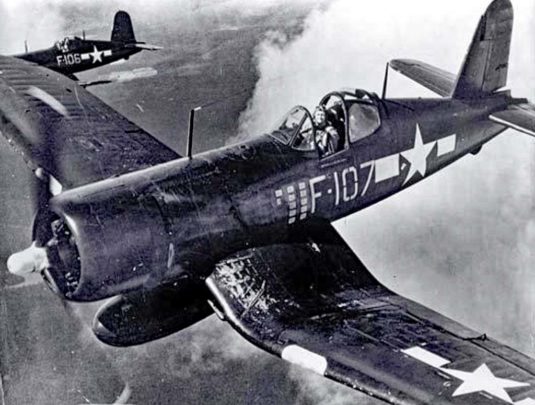 If you like the idea of a lightweight, Part 103 aircraft (no license, no N-numbers, no medical) that is certain to turn a lot of heads at any airport you visit, Corsair is definitely a distinctive and interesting ultralight.

* Empty weight of the basic airframe, without fuel, cannot be greater than 254 pounds (115.2 kilograms), however, FAA guidance (Advisory Circular 103-7) provided some exceptions. If you add an airframe parachute, FAA permits an extra 24 pounds. The lightest of such systems can weigh perhaps 18 pounds, so the designer can “buy” an extra 6 pounds. FAA doesn’t encourage “cheating,” but neither do they expect an owner to remove the parachute and all its elements so the aircraft can be weighed without it. Similarly, an allowance is permitted for flotation equipment — either twin floats or a single float with sponsons. Put all these elements on and an ultralight vehicle could weigh as much as 338 pounds empty. Here is the entire AC-103-7 document from January 30, 1984; it remains unchanged.