Since Chuck Slusarczyk’s first Hawk won Best New Design at Sun ‘n Fun in the spring of 1982 — the same year Part 103 was released — this affordable series of models has continued to increase its flock of smiling owners. Today around 2,500 Hawks of all varieties are flying. By my benchmark, that number separates lesser brands from those that achieve genuine market penetration. 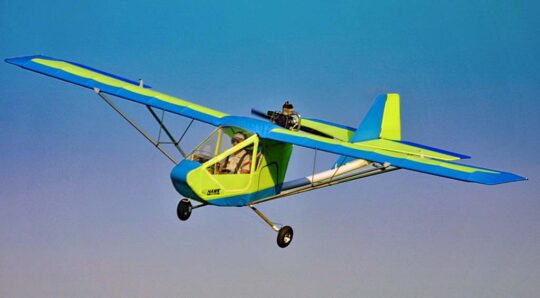 Today the manufacturing of CGS’s Hawk line falls to two entities after the brand’s most recent rescuer, Terry Short, chose to focus on his own strengths. Terry had saved the design from its second owner after the original creator, Chuck, retired from the business. When Terry got busy building airplanes and supplying parts, he realized that it was a more diverse enterprise than originally anticipated. Therefore he was open when Bob Santom approached him. 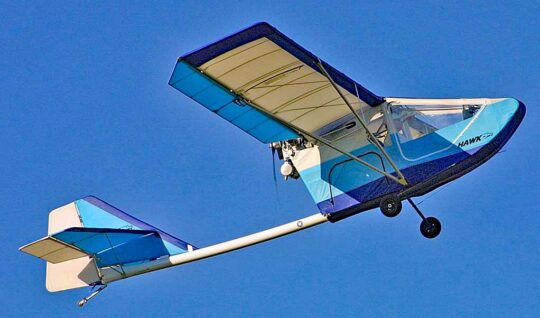 In 2017, Bob Santom and his wife Marlene came to agreement and the Santom family took over rights and production of all CGS Hawk single-seat aircraft. This includes the Classic, Arrow I, Sport, Plus, and Ultra. As he operates “CGS Hawk Single and Ultra,” Bob is assisted by his two sons, LB and Jonah, though the latter is part time as he has a full-time gig with Cirrus Design. Learn more about the Santoms.

Classic and Sport models are not presently supplied, but the Santoms have been supplying parts to many grateful owners of those models. Their overall task needs a little further description.

Bringing Hawk in
to the New Millennia

After Terry Short elected not to go it alone, he accepted the Santom’s offer and they have been working for four years to develop the single-place Hawk line. They’ve done reasonably well with it, delivering parts to help many vintage Hawks continue flying and also building new aircraft, more than a couple dozen of them, and the future looks solid. Bob sounds realistic about business prospects and has built his enterprise to conservative expectations, so it should last a long time. 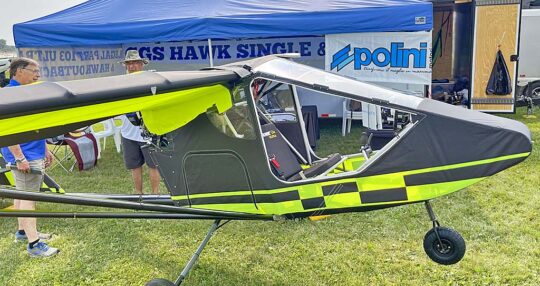 In 2019, Terry also reached agreement with Joseph Shirley, who now builds the two-place models under the business name CGS Aviation. In both operations — the Santoms in Port St. Lucie, Florida and Joseph Shirley in Loveland, Ohio — still cooperate and work with Terry Short of Lake Wales, Florida. Everyone appears to play nicely together, with Joseph sending single-place requests to the Santoms and the Santoms doing the same for the two-place models. Terry continues to work with both entities, an excellent cooperation that satisfies everyone.

That’s how it is today. How did we get here?

A very long time friend of mine, Chuck Slusarczyk created Hawk after being in the hang glider building business for many years. This was the literal beginning of ultralight aircraft and Chuck was most assuredly one of its leading pioneers. However, in those days, no one had computers for CAD or CNC, so drawings were done on drafting tables and documentation could not be kept up-to-date as rigorously as it can be today. 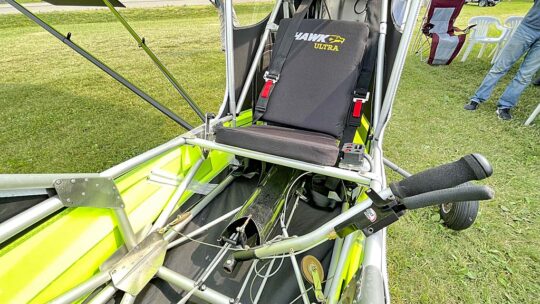 When Danny Dezauche took over the design, he did what he could, but I examined what he received and he faced a major challenge. The documentation needed quite a bit of work. Danny kept the brand alive but he was realistic about the daunting amount of work ahead. It was probably appropriate when Terry Short took over.

When Bob and sons got into the design, they made a serious effort to update manuals and assembly drawings, which customers had told them were deficient — even while telling the Santoms how much they loved flying their Hawks once assembled. Bob and sons set about improving the documentation but they had help and relate an interesting tale how a customer assisted them.

The Santoms recalled, “One of the Hawk’s most faithful owner/builders, Jerry Smith, [had created] a calibrated jig/fixture for the Hawk fuselage assembly, reportedly the only such jig/fixture in the country. Jerry developed that fixture as a result of the 25+ Hawk aircraft he personally built or assisted his friends build. He also helped friends who purchased pre-owned Hawks that did not fly ‘hands off’ as they were designed to do. Jerry would mount those ‘crooked’ fuselages in his fixture, and was able to straighten them up, to ‘fly right.’ Jerry is a true craftsman, with the added benefit of over 3,000 of flight time in various Hawks.”

The basic kit price is $12,500. Most airplane kits then require you to deal with covering, which adds significant expense but more importantly, lots of labor. In fact when you’re done covering, you’ve got to paint and most sub that work out because painting is something of an artform. 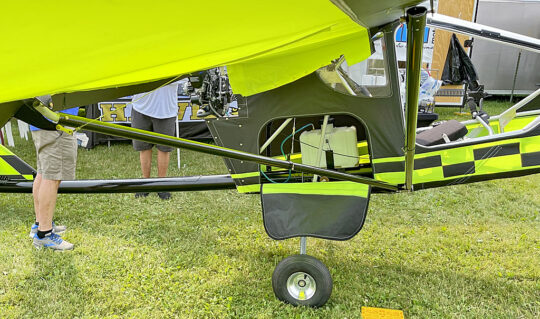 With Hawk, you just buy sewn Dacron “sails,” a term carried over from the days when such wing coverings were adapted from sailboat sails. You slip them on, tighten them up, and you are largely done. Years later, when replacement may be needed, you can simply buy a new set of sails, which is much lower cost and far less labor than recovering (though dope and fabric coverings may go many years with no need of replacement). Dacron sails are $3,100 so the covered kit price is $15,600 before engine.

CGS Hawk Single’s website lists a selection of Hirth engines, but as the nearby images show, the Florida producer installed a Polini on the model shown at AirVenture 2021. The Italian engine has come to dominate the single cylinder, lightweight engine category; examples are commonplace even though the powerplant got its start with foot-launched powered paragliders. 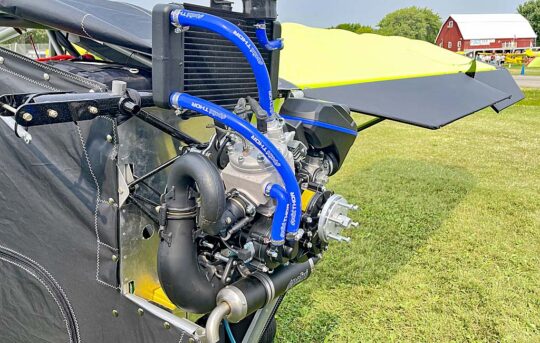 Bob Santom said the Polini engine (scroll to the end of linked article) seen in nearby images is a new powerplant for them — though he noted the Italian company made many thousands of engines for Vespa motorcycles. “Lots of folks appear drawn to this engine with its bright blue cooling-fluid hoses,” observed Bob after they displayed at AirVenture 2021.

A fast-build kit, requiring only 100 hours on average to complete (for first time builders) lists for $4,500. Add this to the above and you’re still in less than $30,000 for a brand new aircraft.

Almost regardless of how you configure your Hawk, this is one aviation’s great bargains.

CGS Hawk Singles is based in Florida at the Treasure Coast Air Park (FL39). Contact them directly for more information.

This video was recorded shortly after the Santoms took over the single place Hawk line — and before CGS Aviation took over the two place model production from Terry Short.

This image of a two-seat Hawk in bare bones fuselage (very similar to the single seaters) gives an idea how the components work together.