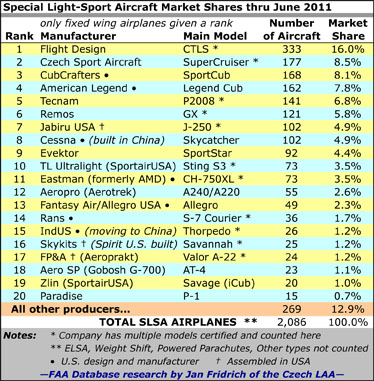 Several readers have asked and we are finally delivering. Jan Fridrich and I present the LSA Market Share Report for the first half of 2011. Figures show a mimicking of 2010 output and that was not a strong year. However, the numbers are not down from 2010 so you could see stability if not growth. *** In the first half of 2011 six companies account for almost 90% of registrations and Cessna alone accounted for precisely half of these. The other five producers: CubCrafters (17% of all first half 2011 deliveries), Czech Aircraft Works (including PiperSport, 13%), Flight Design (7%), Jabiru (4%), and Aerotrek (3%). *** The Over-100 Club now has eight members (chart) up from six at the end of 2010. Our numbers reflect total fleet size, so growth measured this way is inevitable. This method of illustrating market share identifies the strongest producers since 2005. To reveal rising brands that don’t make the Top 20, we use text references. In this period, that includes the Arion Lightning and the Renegade Falcon. While not yet making the Top 20 both are aircraft to watch. Each is U.S. built and in this metric we see the most surprising aspect of this report… *** U.S. manufacturers have overtaken European producers. While unquestionably an American brand, some readers will question Skycatcher’s national origin (think Apple and their devices… designed in the U.S. / built overseas). But that doesn’t change the fact of American designs for the first time out-registering European brands in the first half of 2011. *** Cessna has risen to be the market leader for 2011, moving up to 8th from 13th place in our Top 20, based on 54 registrations this year. Their potential would seem potent considering the Wichita giant reported 1,000 orders. Some industry observers expressed that the Chinese manufacturing operation proved difficult to start. Additionally, Cessna may have allowed things to run slower both to improve quality and perhaps because some customers might cancel their Skycatcher orders if pushed to take them in this difficult economy. *** Let’s keep aviation production figures in perspective. According to multiple sources, airplanes are not the only challenged industry. Marina owners who used to sell plenty of large boats are struggling and RV manufacturers are having a tough time; one billon-dollar corporation (Monaco) entered bankruptcy. The misery of this sluggish economy touches many. As one expert put it, “Airplanes, even Light-Sports, are luxury items and except for the super rich, many otherwise well-to-do persons are holding back on spending.” Meanwhile, the stronger companies are moving upward and the Light-Sport industry’s many small players can be extremely tenacious. As the U.S/EU economies improve, LSA are the most likely to benefit thanks to lower prices and great qualities.