Spirit was designed in Columbia and is assembled in Paris… Tennessee. photo courtesy World Aircraft Co. 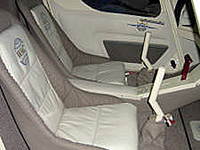 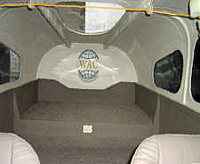 Way over in Paris a new airplane has arrived just as large numbers of pilots head to Oshkosh for AirVenture. Only this Paris is in Tennessee as reviewed earlier. SLSA #120 Spirit comes from a new company but one whose leader earned his SLSA pedigree gaining four model approvals. That would be Skykits and their STOL variations. All are designs from ICP of Italy (Savannah, plus ADV and VG models of the Savannah). FAA considered them a different models so our SLSA List accepted them as such. Then Skykits brought out the Rampage, their own variation of another ICP design. *** Skykits refined those initial approvals into three birds: Savannah VG with fixed-position leading edge slats accented with vortex generators; Savannah VGW, a larger version of the VG in a wide body form with bubble doors; and Rampage with electrically-deployable leading edge slats trailed by Fowler flaps. *** Now from proprietor Eric Giles comes World Aircraft Company (WAC) formed in partnership with a Central American engineer. “Spirit is the culmination of 45 years of aircraft design by MIT aeronautical engineer Max Tedesco,” writes WAC in boasting about their new design guru. “Max put his heart and soul into Spirit.” Tedesco hails from Columbia where he created the design. *** WAC continues, “Our Spirit is fast, roomy, has a sumptuous interior, and carries a greater payload than any Light-Sport airplane on the market.” (See Note at bottom.) “While Spirit has a 260 foot takeoff, it is not an ugly box like some STOL airplanes,” observed WAC. “In fact, Spirit is a beautifully engineered masterpiece from its monoquoe fuselage to its unique, truly original, non-NACA wing.” *** Spirit arrives on the market for five bucks under $100,000 and has a worthy list of standard features. A kit is available for less than $40,000 with the 912 mount package but not including the engine, interior, or a few other essentials. Kit options vary enough that you’ll want to contact the company for details. *** Here’s another U.S.-built aircraft to add to the growing SLSA fleet… #120. Congratulations to the new World Aircraft Company.

* Preliminary specs supplied by WAC state, “Weight full fuel: 728 pounds.” Pilot are used to reading empty weight and fuel capacity but WAC does some math for you. Since it carries 24 gallons of fuel (144 pounds), empty weight calculates to a modest 584 pounds. At that empty weight the claim “Payload with full fuel: 592 pounds” is certainly generous although I did not compare its payload with all other SLSA.