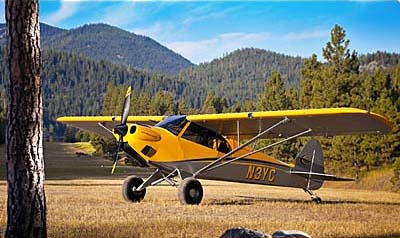 CubCrafters has steadily moved upward in fleet size and has enjoyed two strong years in 2012 and 2013. 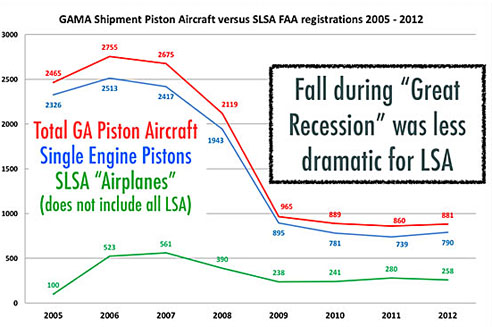 The future remains bright for Light-Sport Aircraft with interesting designs in the pipeline, improved models from well-known builders, and a wide price range able to suit most budgets. Importantly, the safety record remains good. Pictured is Terrafugia’s proposed TF-X.

A number of you have asked about an updated sales report for 2013. While remembering that we report registrations not sales, this year has been a different sort. Registrations are down from 2012, with the exception that CubCrafters remains the registration (and presumably sales) leader. American Legend and their Cubs are also showing more activity than previous years. Beyond the yellow taildragger squadron, it’s something of a mixed bag. More on that below. &#149•• Let me offer you another statistic that amazes me while speaking to ever-growing interest in Light-Sport Aircraft and light kit aircraft that Sport Pilots may fly. In September, ByDanJohnson.com set an all-time record with 71,400 Unique Visitors, 25% higher than our previous record (July 2013). In 2013, Unique Visitors have averaged more than 35,000 per month, a figure more than double 2012, which had been our best year ever. If I appear to be bragging too loudly, let me say that I believe this website is merely the messenger and that it is a fleet of great LSA and a solid team of suppliers and service providers that is delivering visitor growth. People are flocking to ByDanJohnson.com because, I believe, LSA and Sport Pilot-eligible kits and other aircraft are THE growth area for aviation. Thanks to less obtrusive regulations and greater design freedom, this sector is where innovation shines at (relatively) affordable cost. We thank you for stopping for a visit and we welcome you back often.

If our website traffic is soaring and if LSA and SP-eligible kits and airplanes are the growth area, why are registrations off significantly in 2013? It’s a valid question and I don’t presume to have all the answers. However, I’d like to describe the history to help explain. At the dawn of SP/LSA, anticipation had grown to a fever pitch over this new class of airplane with its own pilot certificate. The lack of need for an aviation medical was a huge component, but it was more. General aviation manufacturers, hobbled by a frightfully expensive regulatory structure, were only rarely coming out with new airplanes and the cost of these aircraft was breathtaking (and still is … a Cirrus SR22 can sell for more than $800,000!). FAA is finally acting to move toward industry consensus standards for GA aircraft and we think that will be helpful. Meanwhile the combined effort by AOPA and EAA to rid pilots of the need for a third class medical to fly certain larger airplanes appears completely stalled, even by the organizations’ own statements, leaving LSA as the only alternative for a growing community of older aviators.

“You’re only one medical away from an LSA,” went the line. In the heady days of 2005-2006-2007, LSA manufacturers could not keep up with demand. Many built larger factories, hired more qualified workers, and spend millions to create more and better designs. Component manufacturers also kept a steady drumbeat of sought-after instruments, accessories, parts, and add-on features. Those were exciting years for LSA. Then the “Great Recession” hit hard. Industries far beyond aviation were pummeled and government officials spoke of a banking collapse. Sales declined (see nearby chart) and LSA manufacturers scrambled to adjust. Many lost money as they had built too much capacity right about the time demand slacked. As you can see, it was even worse for GA and bizjet makers but it was hard on the LSA industry. So, manufacturers got small, the only defensive posture they could take as these are not deep pocket companies.

The recession supposedly ended in 2009, though many will tell you their lives haven’t improved much. Unemployment remains high; the U.S. labor force is smaller than it was in 2000 despite 30 million more population. The stock market has recovered, but household income has only risen marginally. Interest rates are held near zero by Federal Reserve policies but loans remain hard to get for small companies. LSA producers had no choice but to adjust.

Another factor emerging since 2006 is increased regulatory burden, in the USA and other countries, contributing to more effort needed by manufacturers to demonstrate compliance and meet added rules placed on them. At the same time new technologies such as glass panels, autopilots, and more complex engines have demanded more from producers. Add these requirements to a difficult economy and you have ample explanation why manufacturers are not building airplanes as fast as they once were. The good news: LSA are better airplanes than ever.

Plus, new designs continue to emerge and most LSA builders remain in business, albeit with smaller operations. The industry is leaner but still active. However, all these factors translate in 2013 to longer delivery times. Some aircraft builders, like Aerotrek and Phoenix Air, never went overboard to build as many airplanes and both those companies have maintained steady businesses with deliveries stretching into 2014. Producers who made many more airplanes are still building but in more cautious volumes. So, when demand finally began rising as it did early in 2013, orders were written and deposits made, but airplanes were in the supply line and not available to be registered. Hence, 2013 registration numbers are soft. As demand and supply find equilibrium, delivery times will come down and registrations will rise. We may not see the manufacturing pace of 2006 for some time but I remain absolutely convinced that LSA and SP-eligible kits and aircraft are the new entry point in aviation. Plus, remember LSA are a worldwide phenomenon. Prices range from less than $40,000 to more than $200,000 but consider that a new Cessna 172 Skyhawk will sell for nearly $400,000 in 2014. That venerable design will still be a 1950/60s design, where modern LSA have many qualities to support a still-strong interest in flying.

Will 2014 be a year of much improved results? I don’t know. My crystal ball is no better than yours. Yet I know this. We have many terrific airplanes and more are on the way. We still have, by far, the least costly pilot certificate and no medical is needed. Our airplanes burn much less fuel and most work great on mogas. We’ve got great engines, panels, and comfortable cockpits. In addition, this: people still want to fly their own airplane. To gain a fresh perspective, what better way than to go aloft and see at this beautiful planet or examine your own neighborhood from above. Flying remains a very special activity and we should celebrate how easily and affordably we can pursue it. Light-Sport Aircraft make this possible for more people and that value will only get stronger.