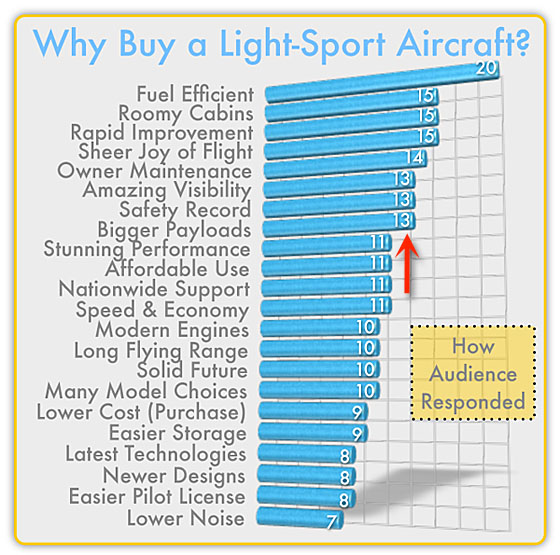 Presenting “20+ Reasons to Buy an LSA.” The forum turned into standing room only showing the LSA interest level is high, a fact confirmed by good attendance at this year’s Expo. photo from Midwest LSA Expo’s Facebook page

At the Midwest LSA Expo that concluded a few days back, I delivered a presentation called “20+ Reasons to Buy an LSA.” However, to handle the subject a little bit differently, I turned it into an audience participation exercise. As I presented each slide of one particular reason, I explained what was meant and elaborated on how each reason made LSA different from other sorts of aircraft someone might consider buying. Then, I asked the audience to raise their hand if that reason was one that might cause them to buy a Light-Sport. I advised that no one was recording their names, so they remained anonymous. Each person could raise their hand as many times as they wanted or never raise their hand if they chose. No one had to participate. About 35 people listened and somewhere between 15 and 25 answered most of the time. The following chart shows the responses. The sample size isn’t large enough to be scientific, but I bet manufacturers and sellers will pay attention.

To make the chart easier to comprehend, I changed the order of reasons to reflect those that provide the most compelling reasons to buy. You can see that number one was fuel efficiency. This result must be satisfying to Rotax engineers and salesmen because that company’s new fuel injected 912 iS engine boasts a considerably better fuel burn rate than the carburetor version (912 ULS) that preceded it and which is still available. I’ll have more about Rotax’s 912 iS in a following post.

Three reasons tied for second place: the spaciousness of LSA cockpits; the rapid pace at which manufacturers can introduce new designs or technology (thanks to the ASTM standards method of obtaining FAA acceptance); and, not surprisingly, the sheer joy of flying these responsive, good performing, roomy, fuel-sipping aircraft. A large share were motivated by the chance for LSA owners to do their own annual condition inspection (after a 16-hour weekend course) or full maintenance (after a monthlong course). A three-way tie for fourth included: the huge visibility many of these aircraft offer (I told listeners that the view from aloft was my main reason to enjoy flying); their solid safety record as established after more than eight years of owner operation; and, the generous payloads they offer both as a share of their gross weight and compared to many GA aircraft.

The arrow shows the most popular reasons answered by more than half the participants, but you can see that all the other reasons also have their adherents. You’d have to hear the hourlong presentation to know precisely what the other reasons mean, but their titles are fairly self-explanatory. Notably, flat last, with about a third of respondents, was the low noise output of most LSA. Of course, that’s something more important for folks on the ground and my audience at the Midwest LSA Expo wanted to fly. Indeed, that’s a leading reason to attend the fall event in Mt. Vernon, Illinois. Demo flights don’t get much easier to deliver than at this flying-friendly airport.

A special thanks to Jacob Peed, director of Aviators Hot Line for tallying the responses as I presented. Aviators and ByDanJohnson.com plan a further effort of surveying these questions as a means to help buyers and sellers achieve their goals.