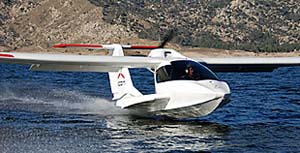 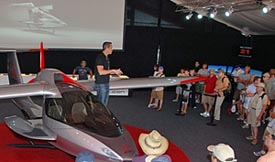 Icon founder and CEO Kirk Hawkins draws a crowd at AirVenture whenever he speaks about the A5. photo courtesy Icon Aircraft

Most of the 118 Special Light-Sport Aircraft have been developed on a very modest budget… not that there’s anything wrong with that, of course. By far, the highest figure I’ve heard was about $2 million to create a new SLSA model. Yet that number doesn’t include starting a company from scratch and going all the way through to a new production facility with airplanes ready to fly away. So, what’s the total investment? Well, that depends on a thousand variables. It can be done quite inexpensively. Or, you can shoot for the moon. *** “Icon Aircraft recently closed a $25 million round of U.S. and U.K. venture financing from several high-profile consumer-product and aviation investors,” the company announced today. “The [money] takes Icon through the completion of the A5 development program and into the production phase.” *** So, one thing seems certain. Before gaining SLSA status or building a single production airplane, Icon is already the LSA market leader… in fund raising. Remos Aircraft also attracted substantial backing but they already had a LSA and a factory. Icon’s achievement, especially during these tough times to raise money, is a credit to their charismatic CEO Kirk Hawkins and the team he has assembled. *** I first met Kirk in 2006 on one of the Sport Pilot Tour stops. He had just started Icon Aircraft so in less than five years his company rose to #1 for fund raising by any Light-Sport Aircraft venture. *** The Southern California company reports enlisting investors such as Google’s Chairman Eric Schmidt and former Boeing CEO Phil Conduit along with other U.S. and U.K. venture investors. Icon will get $15 million to start, with an option for an additional $10 million. The company reports orders for almost 500 aircraft, which at the $139,000 intro price sums to nearly $70 million. *** How are they using the investment money? As they prepare to freeze the design, “Icon engineers performed successful wind tunnel tests (photo) on the new spin-resistant wing… [which] includes a cuffed section and three custom airfoils that provide different parts of the wing with different stall and lift characteristics. The new funds will also be used to start production. Raising money takes a toll, though. “Icon has revised its production start date to the fourth quarter of 2012,” Hawkins said. “This slip, while unfortunate, was necessary because of the unprecedented challenges in the capital markets during the last two years.” While America and Europe remain mired in economic sludge, Icon’s financial achievement is exceptional. Kirk has proven Light-Sport to be investment-worthy while also designing one cool-looking amphibian.