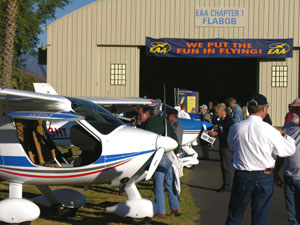 A fleet of shiny Special Light-Sport Aircraft assembled at historic Flabob Airport despite persistent high winds in the southwest. Under an usually clear blue sky, a record 17 models gathered at the vintage airport in Riverside, California. EAA promotional efforts attracted about 600 LSA-oriented attendees. Hosted by EAA Chapter 1 in their excellent facility provided through generosity of Poly Fiber developer Ray Stitts, a steady audience of 200 filled seats throughout the day to have their Sport Pilot questions answered by EAA expert Ron Wagner. One of the newest certified SLSA, the Luscombe Silveraire, is built at Flabob. Owner John Dearden showed me many dozens of pallets holding tooling dies once used to mass manufacture as many as 29 Luscombe aircraft per day! In the vast basin of LA cites, Flabob is an aviation oasis saved from home developers by the Tom Wathen Foundation which operates an aviation high school on airport grounds. Next week…on to Brown Field in San Diego for the Sport Pilot Tour Grand Finale.