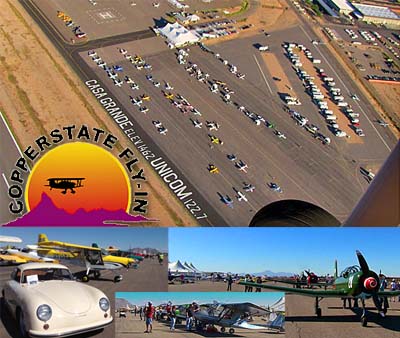 The main view above was taken toward the end of the day. On Friday and Saturday the ramp was packed with show planes and a large number of aircraft that flew in for the day. 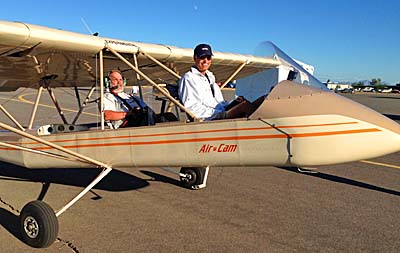 Videoman Dave takes his camera aloft in the AirCam with Phil Lockwood. 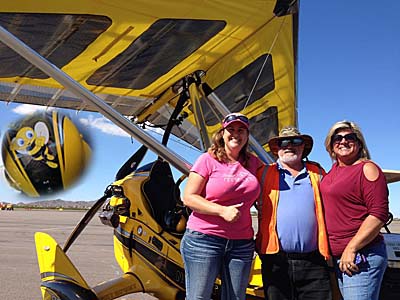 A couple members of Videoman Dave’s fan club wanted to pose for a photo in front of the Bumblebee Revo that we fly for a Video Pilot Report. Amy Saunders (L) and Nicole DeLuca both fly the Revo. Nicole is in training and Amy has flown from Florida to Oshkosh and to the West Coast and back. The Bumblebee-themed Revo belongs to Henry TrikeLife.

We went. We flew (and flew). We shot video … lots of video. Videoman Dave’s dual hand held cameras got a workout as did our six Garmin VIRB cameras. We did more of our popular interviews but we also captured multiple angles on several aircraft as we continue to build our expanding library of VPRs or Video Pilot Reports.

Nearly always hard at work on terra firma, Dave went aloft (photo) to get some air and to capture aerial images. Dave took a seat in the twin-engined AirCam with company designer and boss, Phil Lockwood so you can see Copperstate 2016 from the air.

Honestly, I can hardly imagine how Dave keeps track of those hours and hours of video much less organize them into the productions you enjoy to the tune of 1.5 million minutes a month of viewing. Quite a number of you came up and offered Dave and I appreciation for this effort and we most assuredly like the encouragement this represents. Don’t worry. We’ll keep making more!

Started 43 years ago in 1973 Copperstate Fly-In has been a stalwart of western shows supporting a large pilot population in Arizona and surrounding states. Copperstate is a volunteer run, non-profit organization, which they describe as “dedicated to promoting recreational and general aviation through events, scholarships, and public education.” Copperstate’s leadership added, “Proceeds from the Copperstate Fly-In help support scholarship programs for youth seeking careers in the aerospace industry.”

Between 5,000 and 7,000 people come out to view aircraft and more, this year including (on Saturday) a large collection of gorgeous vintage automobiles. Late October in Arizona is a beautiful time of year with abundant sunshine but lacking the scorching heat of summer.

AIR CAM — This constant flying of airplanes for Video Pilot Reports … it’s hard work but somebody has to be willing to do it. OK, that was a tongue-in-cheek comment as I take very little encouragement to climb into the front seat of an AirCam. Doing so over the beautiful landscape (to my eyes, anyway) surrounding Copperstate was pure pleasure. That this is also my job just proves the right kind of work can be a joy.

Before the event started, I went aloft with Lockwood Aircraft main man, Phil Lockwood. This was our first VPR since the Midwest LSA Expo in early September and we had to fiddle with our flock of VIRB cameras to get everything set. Phil and his sales manager, Robert Meyer were very patient but we finally went airborne with all cameras recording both video and our audio conversations while aloft. We hope you’ll enjoy this when it is posted. (Please be patient; video editing is very time consuming work.)

AirCam is such a pleasure to fly. Of course, it performs extraordinarily well with 200 horsepower pushing it enthusiastically into the sky. However, I learned from Phil that in modest cruise, he can reduce fuel consumption to 3.5 gph … and that’s for BOTH engines. AirCam can also fly slowly with full authority thanks in part to its huge vertical fin. It looks right-sized on this aircraft but in my opinion looks aren’t what matter. Flying qualities are superb on this aircraft and that big tail is a major reason why. I look forward to tell you more on the VPR.

REVO — Speaking of powerful machines with good performance, how about Revo? Hoo yah! I’ve described Revo as the most deluxe weight shift trike built by anyone and I stand by that comment after experiencing not one but two Revos at Copperstate. Revo is also one of the best performing trikes I’ve flown. This rig will blaze along faster than 100 mph, the virtual sound barrier for weight shift aircraft.

Now in talking to other trike enthusiasts at the event, some said more than $100,000 for a tricked out Revo is too much and that it’s too fast. That’s fair. If you want something more modestly priced, you have many choices including some desirable aircraft from North Wing and others … but also from Revo maker, Evolution Trikes. Their single seater Rev, which I have yet to fly, can be had for much less than $20,000 ready-to-fly as a Part 103; many options are available, which will increase cost and move it out of 103 but the point is you have several choices from Evolution.

Price aside, even after six years of observing Revo, I remain amazed at the level of detail Larry Mednick and his team have engineered into their top-of-the-line aircraft. The trike carriage is a brilliant melding of art and function but I want to mention the wing. Also their own configuration, some believe a trike this heavy cannot handle well. Indeed, that’s been true with several other trikes, but Revo handles with remarkable ease and it’s trim systems (pitch and yaw) work beautifully. If you never tried a weight shift, here’s one to consider early although it may spoil you for any other model. See more in the VPR when it’s ready.

In Copperstate Part 2, I’ll cover our work on the Kitfox STi, a pair of Slings, and more women in aviation as we look at a special SuperSTOL. Click back soon!