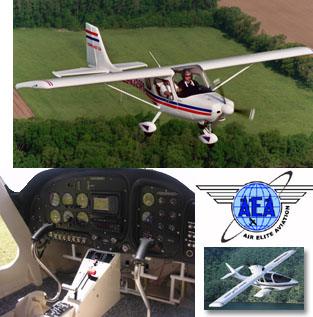 The Rally (top) is another U.S. built, Italian-designed aircraft. Watch for my upcoming pilot report in a future issue of EAA’s Sport Pilot magazine. The completely different SeaStorm is presently delayed while the company works to optimize the design for the LSA rules.

As if 57 models of Light-Sport Aircraft from 44 companies were not enough, some companies have unusual breadth in their product line and have models yet to introduce to Americans. Canada’s Skykits company offers several variations on their Savannah, but I refer to something different. Tecnam has two high wings and a low wing model, but all are built similarly. *** Looking at Storm Aircraft of Italy, we see a wide mixture. The all-composite, high wing, dual door Rally won SLSA approval in February 2006. Next will come the all-metal, low wing, forward-opening canopy Century. Finally, Prestige Aircraft — the U.S. integrator of components from Storm — hopes to launch the SeaStorm, their sleek amphibious entry. All three airplanes are outwardly distinct such that U.S. distributor Air Elite can offer very different choices. Sport Aircraft Works — U.S. distributor for Czech Aircraft Works — offers similar design diversity though their planes are all-metal. So many choices…not enough money to buy them all.