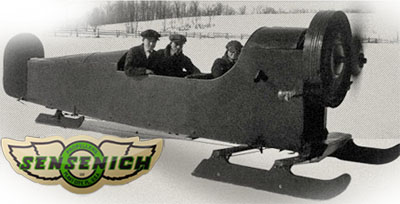 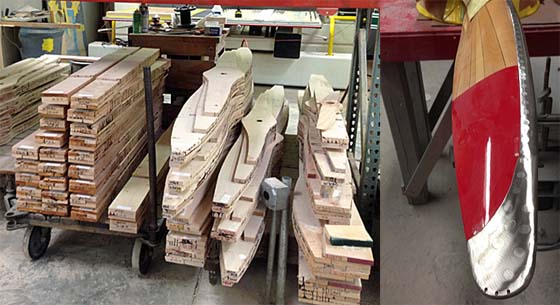 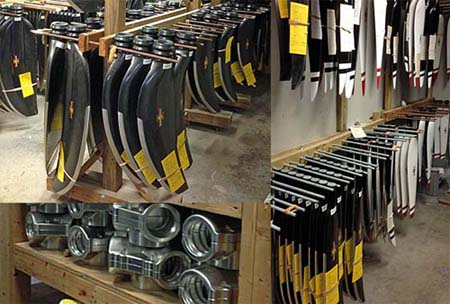 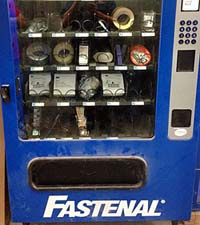 In Light-Sport aviation, we have many international suppliers … of aircraft, engines, instruments, and much more to include propellers. I embrace the worldwide suppliers and don’t fret about America’s position. The truth is, any international supplier has to have a U.S. representative so American jobs and profits are part of that global supply chain and most aircraft built overseas have a substantial percentage of U.S.-produced components. Still, as an American, it is great to see solid U.S. companies prospering. One of those is Sensenich Propellers and last week, I took a tour of this enterprise based in Plant City, Florida (near Lakeland, where Sun ‘n Fun is headquartered).

I was shown throughout the facility by President Don Rowell, a 37-year employee of Sensenich (pronounced SEN-sen-ick). He directly manages the Plant City operation since 1993, after relocating from the company’s founding plant in Lancaster, Pennsylvania. Both facilities continue to operate and are divided by prop material. Lancaster makes aluminum props. Plant City makes wood and composite props. Both Sensenich facilities make only fixed pitch or ground adjustable props. Don explained this means that their primary competition is not Hartzell, as one example, as that company makes in-flight adjustable props. Instead a USA major competitor is McCauley, a division of Cessna and part of Textron. McCauley also makes constant speed props.

Similar to our recent article about Continental Motors, Sensenich has a long and rich history, starting with the prop-powered snow sled shown above. When the propeller on this early snow machine failed, the Sensenich brothers had little option but to create their own … and a new company was eventually born. Formally established in 1932 to manufacture fixed pitch wood aircraft propellers, Sensenich added wood props for a growing fleet of airboats. Aluminum aircraft props were added in the 1950s. It wasn’t until 1999 that the company added ground adjustable composite propellers for all the segments the company serves including airboat, aircraft, and UAVs.

The wood prop process starts with lamination beginning with a large machine the workers affectionately refer to as Clamposaurus (photo above). Gluing edges first, then grouping those birch boards, layers are firmly fastened together with large assembly of C-clamps and resorcinol glue as prop technicians have used for decades. Throughout the process of examining fresh lumber stock and after laminating begins each propeller goes through a 56-point inspection, to assure using only the strongest portions of the laminated boards.

Once the first steps are complete, the manufacturing procedure involves deeply experienced workers identifying the sections of boards that will work for a prop — portions with the grain patterns meeting specifications and being free of various blemishes. After marking off unacceptable areas, a worker uses plastic planform templates to outline where a prop can be milled to produce a wood prop. Once the glue is cured, it can be placed on the bed of a CNC milling machine. The finished prop on right shows a hand-formed brass leading edge that is cap screwed and riveted for erosion protection.

In this short video and after a different tool prepares the hub, a CNC machine “roughs” a wood prop, which is then skillfully carved to exactly match a set of blade shape templates.

As other photos show, the company also makes a whole line of composite props for airboats — a substantial part of the business started in 1949; being closer to where these craft are commonly used is a key reason the company opened the Plant City facility in 1994 — as well as wood and composite airplane props. Images here show the stores of finished prop blades for airboats (the wide ones), aircraft, and the aluminum prop hubs. Sensenich asked that I not shoot photos of the composite building process as they’ve learned some tricks and techniques that are proprietary.

Here’s a fact I found amazing about those wide chord airboat props: Don explained that using the same engine, the airboat props generate 250% of the thrust of airplane props. “It takes a great deal of energy to move an airboat sometimes across dry land,” Rowell clarified.

Although Sensenich employs modern engineering and contemporary CNC machinery, the process significantly depends on the experience and care of employees. Building a propeller remains very hands-on and something of an art. Yet new ways are also embraced. Like any company in an open market, Sensenich had to keep innovating to be competitive and to increase performance of their fixed pitch props. They also look for other ways to control quality and costs, such as this “candy bar machine” that is used to dispense supplies such as tape, brushes, and more. When an employee takes out more supplies the company is aware and supplier Fastenal automatically logs the use and eventually resupplies depleted items.

Sensenich is an iconic brand of propeller and an American standard. Look around at your local airport. You’ll probably see many propellers that come from the company in Plant City, Florida.