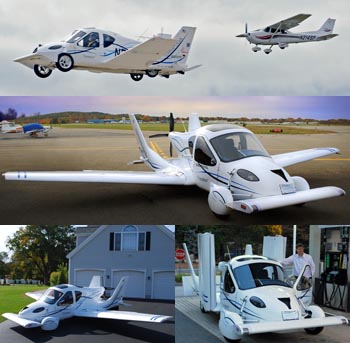 You’ve surely seen news coverage of Terrafugia’s Transition, the “roadable” LSA from a brain trust of award-winning MIT engineers in Woburn, Massachusetts. This modern version of the well-worn flying car concept has attracted plenty of media attention, and deservedly so, I think. I have been reviewing all their materials and info for an article to appear in Light Sport and Ultralight Flying magazine and I’m impressed with the task’s complexities. *** Step one is the effort to create a powered-folding-wing, four-wheel aircraft that flies as the designers wish. That’s hardly a trivial project especially as the folding wing must work in such a way that you can then drive down the road without removing those wings. (In comparison, Icon’s A5 also has powered folding wings but they stay full length, sweeping back against the seaplane’s fuselage.) *** Step two is making a road-capable drive train using the same Rotax 912 powerplant. Now, others have accomplished such things, perhaps, but did those projects meet a set of rules called the Federal Motor Vehicle Safety Standards? After reviewing what’s involved, my guess is they did not. The long list of required items includes such as airbags; roll cages; crumple zones; crash-capable bumpers; head restraints; highway-speed brake systems; pothole-tolerant suspension; plus features like rear-view mirrors; automotive lighting including turn signals; and windshield wipers. (Whew!) *** Step three… since all that hardware adds weight — and since none of those things are needed on a LSA — Terrafugia has petitioned FAA for a higher weight limit. No decision has yet been reached by the agency.