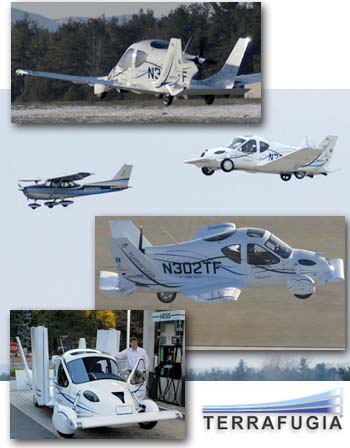 The proof of concept Transition will continue flight and drive testing. A second Transition will go through the ASTM review process for Light-Sport Aircraft certification.

Massachusetts-based Terrafugia announced today the first flight of its proof of concept Transition “roadable aircraft.” The maiden flight occurred on March 5th and followed six months of static, road, and taxi testing. Transition made its first escape from Earth at the Plattsburgh, New York airport, flown by retired Air Force colonel Phil Meteer who reported, “Transition flew like a really nice airplane.” *** Terrafugia said their Transition can cruise 450 miles at 115 mph and can drive at highway speeds on the road. Designers say it fits in a standard home garage. Transition uses front wheel drive on the road; both ground and flight modes are powered by the 100-hp Rotax 912S. Terrafugia CEO Carl Dietrich said that transforming Transition from plane to car takes the pilot a mere 30 seconds. Then you can drive your airplane off the airport to a local gas pump and fill up at a substantial discount to 100LL avgas (see inset photo of Dietrich at gas station). *** For more information, contact Terrafugia via email or call 781-491-0812. Find Transition specs or photos. Refundable airframe reservations are being accepted at this time.