As Sun ‘n Fun 2022 comes to a close, so does my daily reporting. This happens through long days and short nights. My sleep schedule can soon get back to normal. In an article already underway, I will make some forecasts for what we’ll see at AirVenture Oshkosh 2022 based on what was displayed at Sun ‘n Fun 2022. Watch for that in a couple days after I catch my breath.

I’m also scheduled to go fly the BOT SC07 Super Cruiser. I hope to have reports on these later in April.

What is it about orange? Several people told Savannah rep’ Walter della Nebia that it attracted them. I felt similarly. I can’t explain it but the show airplane certainly looked great and drew plenty of visitors. 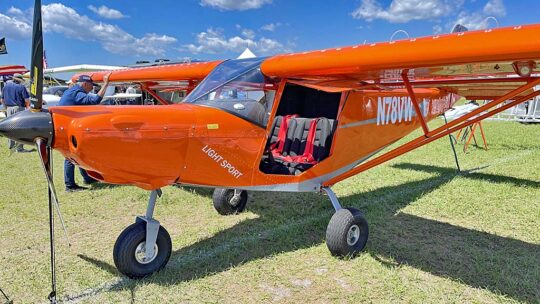 Savannah painted a bright orange with gray accents turned out to be a crowd pleaser, attracting plenty of eyeballs including mine.

I’ve written about and done videos on Savannah. The airplane has not changed too much because it works well as it is. As you’ll read below about Petrel, builders are making plenty of small changes but when a shape works, you don’t change it. I always relate this airliners. Why do they all look essentially the same (except for size and specific capabilities)? Because that shape works. Savannah is similar.

Several people said it looks like a Zenith CH-750. Perhaps it once was similar but over the years ICP has been building this, many changes have been made. Still, it’s certainly similar to the American kit. Here are two major differences: (1) Savannah is available as a ready-to-fly Special LSA unlike the -750, which is only available as a kit. Models with modest differences were approved years ago, filling slots #39, #47, and #48 on our SLSA List. (2) Unlike nearly every other producer of light aircraft, you can get a Savannah now, as in today. Walter reported he has five Savannah kits in stock right now; no waiting.

That makes Savannah nearly unique at a time when many producers at Sun ‘n Fun were quoting deliveries into 2023, with some saying late in 2023. Almost two years is a long time to wait so I doubt those Savannahs will last too long. If this attractive LSA interests you, you may want to contact ICP North America sooner than later.

Scoda Aeronautica’s Super Petrel LS has been in the U.S. market for several years and has achieved a solid measure of success. I stopped by their space at Sun ‘n Fun 2022 to see what they meant by “400 Series” on the hull of this flying boat. 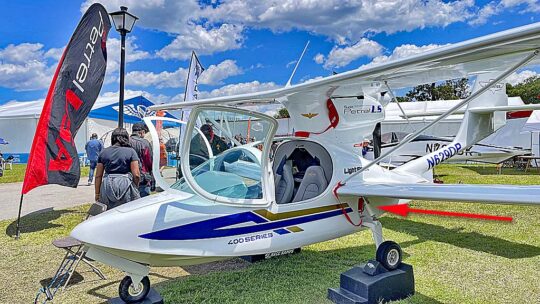 Scoda’s Super Petrel LS has seen hundreds of very small improvements. One you can see in a completed aircraft is a new main gear shock absorber (arrow).

A glance at the design confirmed no major changes have been made so why apply this designation? Then I spoke to a couple owners at their space to learn “400” has multiple explanations.

Over the years, some 400 changes have been made to the airframe. These are mostly minor but one you can see is a substantial shock absorber on the main gear (photo, arrow). The majority of other changes were less visible or invisible yet such a stream of alterations — sometimes called by an industry phrase, “CANI,” for “Continuing And Never-ending Improvement” — warranted some mention even if you can look closely and cannot see the difference. This is likely true on many other aircraft but Scoda chose to help customers or prospective buyers become aware of these minor upgrades.

Another way “400” makes sense that 40 Super Petrel LS aircraft flying in the USA. This occurred over several years, but the Brazilian manufacturer of the design has made a steady push to increase it’s share of the LSA seaplane market.

Here is my pilot report on Super Petrel from a few years back (the company name was Edra, later changed to Scoda). The subject aircraft is essentially the one being sold today, albeit before some of the 400 improvements.

No question that pilots are eternally intrigued by more powerful engines. From the early days of ultralight and then Light-Sport Aircraft, engine power output seems only to go in one direction. 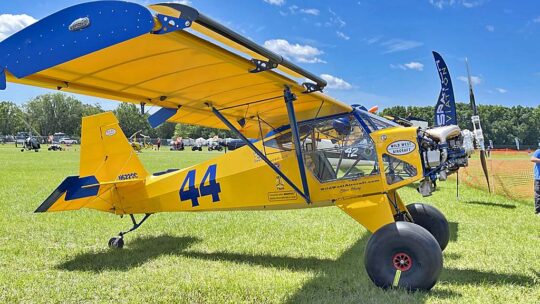 Steve Henry’s high-revving Yamaha-powered Just Highlander wowed crowds during the STOL competitions held at the end of most days in Paradise City. Number ’44’ has a highly modified airframe plus the 300-horsepower engine.

Evidence of fascination with this is Steve Henry‘s attention-getting Yamaha-Powered Highlander STOL aircraft. Seen in nearby images, Steve’s aircraft was back flying after a mishap a few days earlier in strong winds. The aircraft ended up on its nose but the damage was limited to a prop.

The Yamaha Highlander that blasts into the air comes with a healthy but un-LSA-like sound. As you can see in the nearby photo he has highly modified the airframe to excel at STOL comps.

A few years ago at the Copperstate Fly-in in Arizona, I had the pleasure to fly with Marc Holcomb in his homebuilt Arion Lightning. We flew from Buckeye where Copperstate was held to Greg Hobbs‘ base in the general Tucson, Arizona area. Greg and his wife Crystal created this place where owners can get professional assistance while they build their airplane. Marc was one builder who stayed in their on-site living quarters as he finished his Lightning. 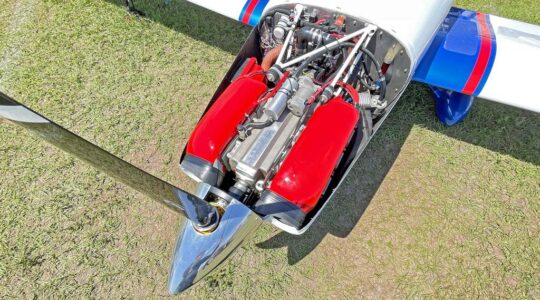 Marc Holcomb’s Jabiru 3300-powered Lightning has been modified with a supercharger. A video will go into many of the details.

At the time they talked about a performance boost for the Jabiru 3300 six-cylinder, 120-horsepower engine that propels many of this model. Marc built an Experimental-Amateur Built Lightning so he is not limited by the LSA speed or equipment parameters.

At Sun ‘n Fun 2022, we interviewed Marc about his supercharged Jab 3300. He gets impressive speed increases and can climb to altitude without significant power loss. In flat-as-a-pool-table Florida, this may seem less valuable but in mile-high Denver, Colorado it almost becomes necessary. Watch for the video with lots of technical information as soon as Videoman Dave can get it edited (please be patient; editing consumes many hours of detailed effort).