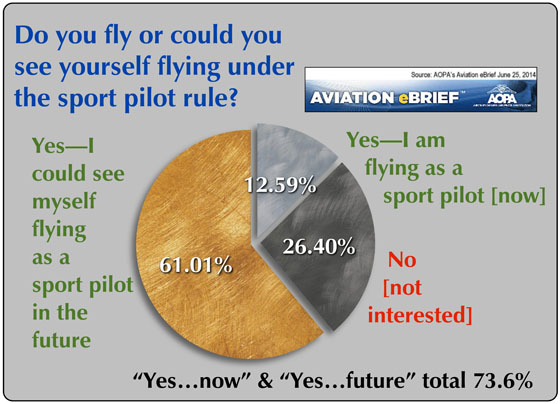 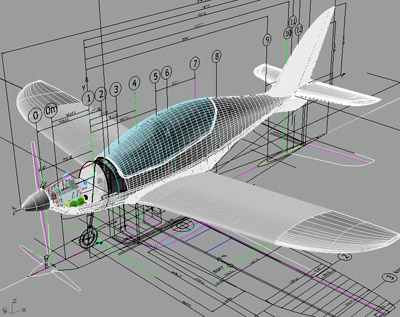 In July I posted an article about an AOPA survey conducted through the biggest member organization’s daily newsletter, eBrief (sign-up page). That provided a broad glimpse into both the mind of an AOPA eBrief reader (and responder) but might also be used to forecast some possibilities for the LSA industry. In this article, I’m going to again use the survey data but look at such information in a different manner. I suspect LSA business people will read this with interest but it may be meaningful to any pilot interested in buying or partnering their way into a LSA or in finding a Light-Sport Aircraft available for students and others to fly at flight schools and FBOs around the country. LSA are by no means limited to the USA, of course, so I’ll also make some informed guesses about what I see as the global aspect to the LSA development, now beginning its second decade*.

Let’s do a bit of number review to help put this in context. AOPA reports about 400,000 members, making it by far the largest pilot membership organization in the world. Let’s be conservative and say only about 300,000 are active or interested in being active. (I hope the number is not this small, but I prefer to err on the side of caution in this review.) As the nearby chart shows, 12.59% of eBrief readers say they are now flying while using the privileges of the Sport Pilot certificate. While 26.4% said they were not interested in sport pilot, the largest single group responding said they could envision themselves flying as a sport pilot in the future. The two affirmative answers total 73.6 percent. I stress that these numbers come from eBrief readers and may not mirror all AOPA member opinions. However, assuming the sample size was large enough to be valid — for reference, surveys of about 1,000 are commonly used to sample the entire U.S. population — then this eBrief survey might mean the following.

Assuming 300,000 “active” AOPA members, 12.59% of them represents 37,770 members. The future figure 61.01% would represent 183,030, and the two numbers sum to 220,800 members. Based on FAA registration data, we know 37,700 do not presently own a LSA nor a compatible kit aircraft nor a parameter-meeting Standard Category airplane but aircraft ownership was not the question posed. However, whether they own them or someone else does, that many pilots could be flying LSA or LSA-like aircraft that do not require a medical. Apparently many more are intrigued by flying modern, fuel-efficient, and superbly equipped LSA or other aircraft that don’t require a medical. Note that beside fully built Special LSA, Sport Pilot certificate holders may fly Standard Category aircraft or homebuilt aircraft so long as those flying machines meet the parameters (1,320 pound gross weight; speed less than 120 knots, etc.). Thus, available aircraft include SLSA, ELSA, Experimental kit-built aircraft, or other Sport Pilot-eligible aircraft beyond LSA.

If at some time 220,800 AOPA members are interested in flying as a sport pilot, how many might one day consider buying a new or used Light-Sport Aircraft? This question is far fuzzier so let’s soberly reduce the numbers. We can guess that only one in ten of those (or 22,080) are truly interested to buy a LSA. Of that group, we can estimate only one in six of potential buyers (3,680 or 1.67% of interested members) will act on that interest. If it took ten years to fulfill such market potential, that averages 368 aircraft per year. Based on the first decade of LSA, this figure is certainly achieveable; the industry can safely produce this number … indeed, has produced many more in the years before the Great Recession. Are these assumptions reasonable? Who knows? The GA industry sells more single-engine piston aircraft per year so those numbers certainly aren’t beyond belief when considering the potential large interest from AOPA members as reflected by responses to the eBrief survey.

For LSA producers, the estimates above are only part of the story. In the sport or recreational aircraft world, the USA is not the dominant market. It is surely the largest single-nation market but the rest of the world easily accounts for at least 1:1, that is, for every sport aircraft sold in America, at least one may be sold in some other country (though we lack hard evidence of this). As LSA are presently accepted in several other nations with more to follow, the 1:1 ratio remains conservative, I feel. Thus, 368 U.S.-delivered aircraft could translate to 736 aircraft sold globally each year for the second decade of Sport Pilot / Light-Sport Aircraft. Will this occur? The only sure way to know is to ask again in 2024 but my speculation using the AOPA eBrief survey numbers is that the future for LSA remains bright.

* The SP/LSA rule was announced July 20, 2004 but the first aircraft were not FAA accepted then delivered to customers until April of 2005. So, LSA will only reach their first full decade completed by Sun ‘n Fun 2015.