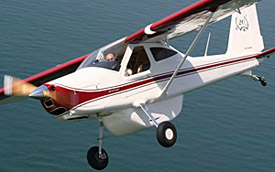 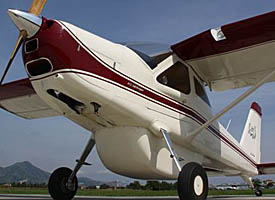 The cargo pod added to the ruggedness of a tail dragger should make Tecnam’s new model appeal to bush flying enthusiasts. 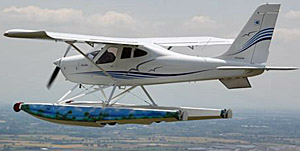 The also-new Eaglet Amphib. Catch our video on the Eaglet model series.

The prolific producer operates this large facility in Italy.

With five models currently meeting ASTM standards for SLSA, Tecnam has established itself as the leader in prolific design of Light-Sport Aircraft (they also have a Twin and are working on a four seater plus an eleven seater). Much of this design prowess owes to family patriarch Professor Luigi Pascale, known for his incredible output of designs over the years under the company names Partenavia and Tecnam. Even into his 80s, Luigi Pascale continues his energetic engineering.

*** Recently the U.S. importer for Tecnam got their chance to fly the new Tail Dragger. Tecnam North America CEO Phil Solomon wrote, “We flew the Tail Dragger a couple of weeks ago and it climbed like a rocket at over 1,600 feet per minute with the Lycoming engine and performed flawlessly.” He promised to send some in-flight footage, which we’ll add to this article when edited and ready.

*** Phil also sent some photos of the latest flights in Italy. As you can see, the Rotax-powered Tail Dragger now features a cargo pod. The overall combination looks tailor made for use in bush flying, opening another new aircraft product area for Tecnam. As written earlier, the Tail Dragger boasts a retro look that should endear the well flying LSA to nostalgia buffs as well as outdoor enthusiasts operating from unimproved airstrips. As our fresh video identifies, this variation of Tecnam’s P92 is also a celebration of 20 years of history for the popular model from the Italian manufacturer.

*** Phil also sent an in-flight photo of the Eaglet Amphib. He encouraged everyone to note the slick retract wheels (they’re hidden well enough that you’ll have to look hard to see them). Both the Tail Dragger and the Eaglet Amphib are new offerings in the last year. Choosing the best from the sheer number of models offered by Tecnam and their North American distributor will require a conversation with the import organization.

*** You might want to call soon. Phil observed, “We still have availability under the One Per State Program including for the Tail Dragger but we will be terminating the program in the near future so now is the time to commit!” The program allows you to be the first in your U.S. state to order which will secure a sizable 20% discount on one of the company’s seven SLSA models. When one person buys a specific model for his or her U.S. state, the deal ends for that model in that state.