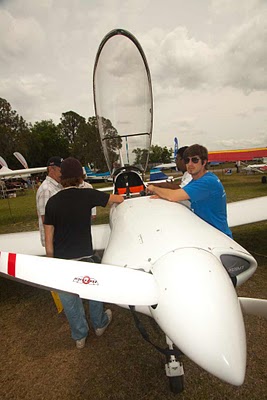 Sun ‘n Fun 2010 is history. Overcast skies and rain all day kept the crowds away — in droves.  Still, it was a good show, with positive signs for the Light Sport Industry in the weeks and months ahead. *** I’ll be recapping highlights from the entire six days over the next several days; there were lots of cool events and gear I want to share with you. *** The short tell: overall attendance by most exhibitor accounts seemed a bit light over the week, but several airframe manufacturers reported modest to brisk sales. *** Generally, the consensus was one of guarded optimism.  Some makers like Arion (Lightning) and Piper (PiperSport) sold 7 or more airplanes each.  Others were happy with two or three.  And some long-time, well-established companies had great leads but no firm orders. *** Of course, sales hyperbole is tempting to indulge in at a show: no one wants to admit to potential customers — and especially the aviation media — that they just spent thousands of dollars hoping to attract buyers and show the flag — and have nothing to show for it.  It takes a lot of courage to hang in there in a down economy, and many of these folks have been running on fumes for some time now through the worst of it. *** Nonetheless, as my tireless pal Dan Johnson tallied, sales were at least in the 20s and that’s a good number in a recovering economy. *** Likewise, the excellent placement of his LSA Mall, which was chock full of aircraft displayed side-by-side, brought thousands of people in direct contact with light sport flying.  I must have gone by the Mall 30 times during the show, and it was always busy with folks checking out these new planes they’re hearing more and more about. *** As in life, not every company rockets skyward; economies don’t work that way.  But I spoke to enough people in the industry with smiles on their faces to give me a solid sense that we’ve flown out of the downdrafts and are climbing for clear blue skies again.