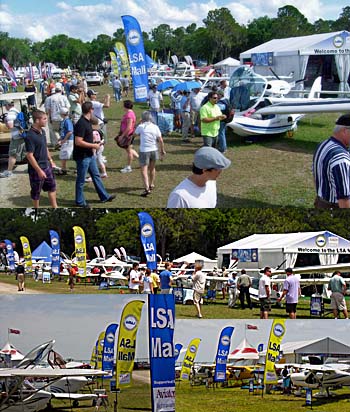 LSA Mall Draw! Several notables were seen including, among others: Sun ‘n Fun president John Burton; Cirrus co-founder Dale Klapmeier spent an hour; the assistant to the CEO of BRP (parent of Rotax Aircraft Engines), Roland Larouchelle visited more than an hour. In all… the 2010 Sun ‘n Fun LSA Mall appears to be a big success. Almost everyone is smiling and that bodes well for the rest of the sport flying season. Top photo by Ray Bradford

After a few days in a new location for 2010, the LSA Mall hosted by LAMA and supported by Aviators Hot Line / Light Aviation Edition has proven to be a hit. On Friday (day 4), crowds were especially thick. All 18 airplanes in the Mall were often surrounded several deep. *** Winds finally moderated into a beautiful Florida day. Cameras, videos, and phone cameras clicked furiously as visitors pored over the flock of shiny aircraft. *** In particular the PiperSport attracted waves of attention but all exhibitors appeared busy throughout the morning and early afternoon (when people stream into the event). I’ve taken reports from several manufacturers that sales are popping. This is notably different from Sebring where people showed interest, took plenty of demo flights, said they wanted to buy, and then… nothing! *** Sales have been dead slow in early 2010 and my best guess is that potential buyers — who often have the money to afford these airplanes — are hesitant while they wait for the economy and their financial picture to stabilize. Perhaps confidence is returning because money is changing hands, and it’s none too soon for an entire industry enduring the slowest period in LSA history (all five years of it). *** The following is anecdotal, reported sales may not occur, and this is certainly not a complete list. With that caveat, here’s some manufacturers reporting actual sales with deposits taken: Arion sold 6 Lightnings, Flight Design reported 3 sales by day 2, Gobosh made a sale, and Piper has taken 5 deposits at the show. *** Despite my caution above, I think the industry might record 20-30 sales at Sun ‘n Fun. Another gauge: the Rotax service tent in the front of the Mall was dense with people seeking technical info.