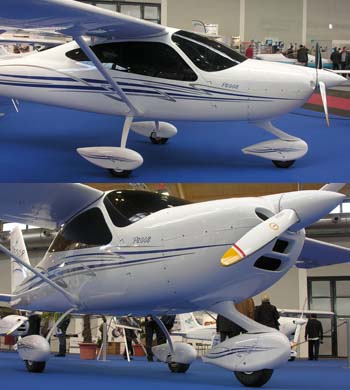 Composite Tecnam — This is the first not-all-metal Tecnam aircraft we’ve seen in the LSA community. I fell in love with her smooth lines at Germany’s Aero show in April 2009.

Tecnam can lay claim to being the “largest LSA manufacturer” by virtue of producing more than 3,000 ready-to-fly aircraft (with approximately 120 of them flying in the USA as “official LSA” — the U.S. is a relatively new market for the Italian company). In my travels to Europe and other countries, I’ve seen a lot of Tecnam models sold under the rules of those nations. And the company was formed back in 1948. *** But even with all those aircraft built and many interesting designs — such as the Echo Super, Sierra, Bravo, Eaglet, and even a new twin that isn’t a LSA — for my money, the P2008 is easily the prettiest two seater the company has ever designed. It resulted from a marriage of Tecnam, an all-metal airplane company, to Spain’s CAG or Composite Aeronautic Group. The latter, bought by Tecnam, was the short-time producer of the Toxo Sportster *, a handsome all-composite LSA. Tecnam won’t be producing the Toxo but P2008 pairs Tecnam’s prodigious design ability with CAG’s expertise in composite manufacturing. *** In America, Tecnam is represented by Tecnam North America, a talent-heavy group based in Richmond, Virginia. Among other interesting announcements (at least one of which I’m not at liberty to disclose) you’ll get your first chance to see the P2008 at Sebring 2010 …and maybe they’ll even add a friendly name to the number of this gorgeous airplane. * Only a single Toxo ever entered the USA.