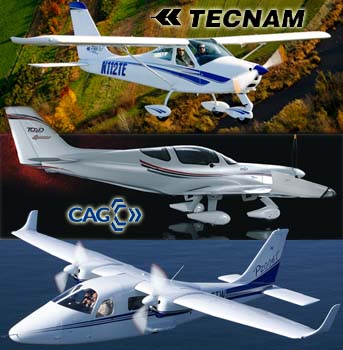 With 2,500 aircraft flying, Tecnam is one of the most prolific light aircraft builders. (See their Fleet Chart with a couple clicks.) Now their focus turns to the twin engine four seater P2006T. Since 2004, Tecnam has churned out a new model every other year or faster. Recently they bought the low wing composite Toxo.

Costruzioni Aeronautiche Tecnam, simply “Tecnam” to Americans, manufactures the Sierra, Bravo, Echo Super, and Eaglet SLSA. On June 10th the Italian company completed its purchase of Composite Aeronautic Group (CAG). U.S. pilots became aware of CAG’s Toxo after it won SLSA airworthiness in March 2008. *** Tecnam CEO Paolo Pascale Langer explained, “Although Tecnam is expanding capacity due to significant growth we still require more space along with enhanced access to additional technologies. CAG provided both.” *** Tecnam plans to use CAG’s Zaragoza, Spain facility to double their current production of two seat aircraft. They claim annual output of 300 light single engine aircraft per year. The company hopes to boost that figure to 600 aircraft per year by the end of 2009. *** Tecnam has been focused on their dual Rotax engine airplane, the P2006T. Langer indicated, “[Using CAG facilities will] also release production space to meet the sizeable order book for the P2006T, a four-place twin currently in final certification with EASA and the FAA.” The acquisition comes as the design for another new aircraft is being completed by Tecnam’s engineering group. The new model is expected to debut at Aero in Friedrichshafen, Germany and at Sun n Fun in the USA in 2009.