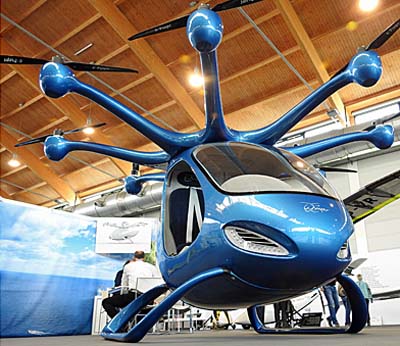 For your holiday reading about flying machines, I want to veer off into the weeds for one article. Don’t worry; lots more conventional reporting will follow.

After the Uber Elevate conference, mainstream media was all over eVTOLs like bees on flowers in spring. Breathless stories abound regarding how we will soon all take autonomously-flown taxis around our big cities, saving time and restoring the planet’s environmental health. Yeah, maybe… we’ll see about all that.

What if you had guests over for the holiday and one arrives in the bright blue machine pictured nearby. Would you go look at it? More importantly, what if the owner said, “Let’s go for a short flight; you can see your home and neighborhood from above and it will only take a few minutes.”

Indeed, what if he threw you the keys and said, “You can go by yourself if you like.”

“But I don’t know how to fly a helicopter,” you plead, knowing the machine in your driveway is not a helicopter. 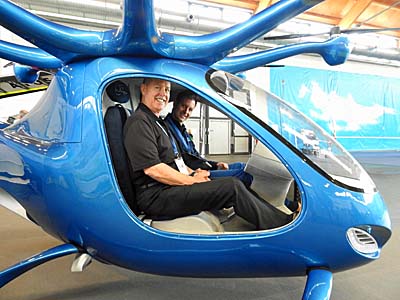 “Oh, don’t worry,” your friend replies. “Just move the joystick as you’d expect. If anything goes wrong, just hit the big red button and it will safely return you to precisely where you took off.”

“But what about the batteries …what I run low on juice?”

“Ah, don’t sweat that either. The machine knows and it will land you safely before you run out of power.”

Would you, the expert fixed wing pilot, take the offer? Would someone else who always wanted to fly, but who was put off by the challenges of learning to fly conventional aircraft, want to take the offer?

A French company called Electric Aircraft Concept is developing Whisper, an 8-motor, 8-rotor, 2-seater. I examined and sat in the electric rotorcraft displayed at Aero Friedrichshafen 2018. Not autonomous, this one is clearly made to be flown, as you might correctly infer from its joystick. 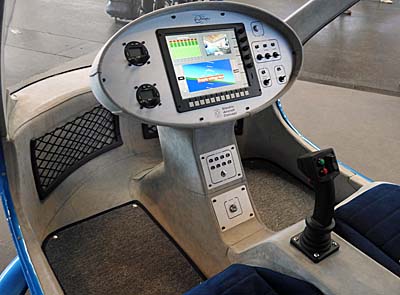 Safety, low noise, performance, ease of control, and maintenance cost reduction are the selling points of Whisper, company officials said. They plan to move towards manufacture and marketing by 2020, hoping to sell ten machines in 2020, twenty in 2021, and forty in 2022. Those targets sound refreshingly sane to me, as opposed to other builders boasting huge volumes just over the horizon.

Current flight time is up to thirty minutes, they said, but representatives — like pretty much everybody else in the electric airplane development game — expect battery life to be increased with future technology.

An emergency parachute is part of the concept, however, it will also be possible to land in the case of a single rotor failure. It’s actually quite believable that with eight motors/rotors, the loss of one could be fairly easily remedied with the others. It’s just software …although that unveils the vulnerability in the near-future forecasts by some media.

Others are skeptical over positive development in battery technology. Does an alternative exist? 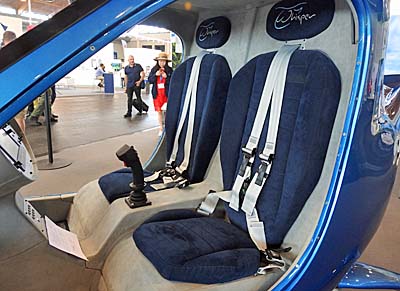 Yes, of course. I reported here on a fuel cell trike being built by Gerard Thevenot, another Frenchman who once ran one of the largest hang glider manufacturing companies called La Mouette.

Developer Miles Garnett, President & CEO of Gestalt Aeronauticals, said the answer is fuel cells using hydrogen as the fuel. Indeed, this is the most plentiful stuff in the universe and it’s been working fine to power the Sun for the last few billion years. The trouble is storing the hydrogen. You can use tanks with gas or liquified hydrogen but both present huge challenges.

Miles and others refer to hydrogen storage using incombustible polymer. “Incombustible” sounds good, better than those persistent reports of eVehicles catching fire …perhaps not often but with real problems when a fire does start.

Instead of tanks with liquid or gas, Miles and others talk about hydrogen stored “in materials,” that is by binding the hydrogen to a solid. The science on this appears well developed.

Miles makes his point about the advisability of fuel cell engines employing hydrogen in a material form. It potentially offers far longer flight endurance in flight and won’t catch fire the same way densely-packed lithium batteries can, he wrote. Multiple sources reference the bursting-into-flames problem but perhaps chief among them in regards to battery-electric aircraft is FAA, which appears to have significant fear of lithium batteries on board aircraft.

Are Miles and his hydrogen fuel cell developers the only ones singing the praises of this technology? Nope.

He reported that Mazda will release their RX9 in 2019. This updated model produces 400 horsepower using a rotary engine that he said “has solved all the problems of the previous models.” But here’s the kicker. The new rotary engine can work with either gasoline or hydrogen. Adapting their technology should allow for a VTOL personal plane. 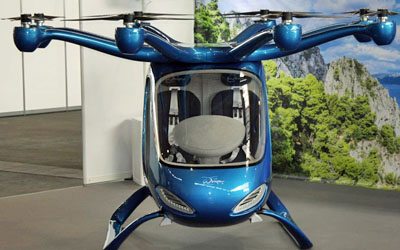 Whatever the eventual solution, it has become more and more clear to me that multiple-rotor aircraft — some with wings that pivot to transition from vertical liftoff to speedier in-flight cruising — remain clearly in the future of flight.

I admit I am slowly being swayed from my love of conventional winged aircraft that I know so well to something with spinney or flippy propulsion. Oh, I don’t see anything to replace the efficiency of fixed wings, for example, in the case of a gliding/soaring aircraft (think: sailplane or hang glider) but for many kinds of powered aircraft …well, the times, they may be a-changing.

I’ll try not to overdo this reporting and for the next decade or so, developments will keep octocopters and such in the aerial lab, so to say. Meanwhile, the great news is that we have an embarrassment of riches with many choices of ultralights, light kit aircraft, and Light-Sport Aircraft. I hope you can enjoy one on this holiday!

And now… here is our video interview: