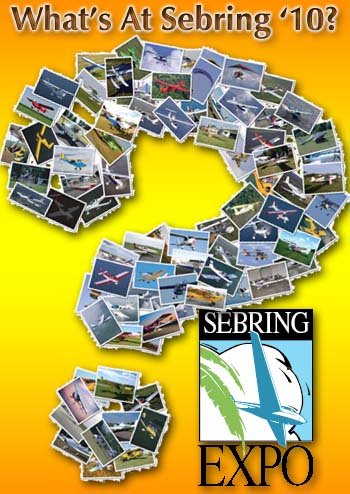 LSA Season Starter — For enthusiasts of LSA, Sebring is a Must-Go event that is all LSA and nothing but LSA. C’mon down to warm & sunny Florida and see the latest and greatest.

If you like LSA or if you are following the development of this newest sector in worldwide aviation, you pretty much have to go to Sebring U.S. Sport Aviation Expo. The sixth annual event opens in less than a week and it looks to be yet-another blockbuster affair. Here I’ll provide a few highlights, but I also expect to be surprised by some new presentations. *** The first airshow of a new decade may show a new hope for recovery in aviation. One of the biggest buzzes has to do with Piper Aircraft and their possible entry to LSA (as has been been widely reported). This matter is not settled yet but Piper will have an exhibit at Sebring (itself something new). *** We’ll also see the tandem high-performance MySky MS-1, a U.S. design that is moving closer to production; the new and beautiful P2008, the first to employ composite construction from Tecnam; and attendees can have a look at Rose Pelton‘s own Skycatcher, which will be on display in Cessna‘s space. This is conforming example #1 of the Skycatcher. *** We should also see the TL-3000 Sirius [UPDATE 1/16/10 — Sirius will not appear as all arriving models are already sold]; Legend said they are bringing their now-for-sale AmphibCub, and a closer-to-production version of the Flight Design MC. Sebring ’10 will also be the chance for LSA fans to see AOPA’s Fun-to-Fly Sweepstakes Remos GX; this is the big member organization’s first appearance with an exhibit at Sebring. *** Sebring will be Garmin‘s first unveiling to the LSA community of their impressive new touch-screen Aera GPS and Dynon will be showing their gorgeous new SkyView digital instrument series. *** In other (boring but important) news, I am heading an ASTM Task Group to prepare an official ASTM Audit Standard. The Task Group hopes to have this “nearly ready for ballot” at Sebring as a means of showing FAA that this industry is truly moving with its oversight programs. Cessna and FAA have appointed persons to assist this Task Group, showing the seriousness with which this effort is being taken. *** In equally dull but vital news, FAA will be gathering with selected builders in at least two sessions. And finally, FAA’s Light-Sport Joint Safety Committee will be meeting at the close of the ASTM meetings just before Sebring begins. In all… WHEW!