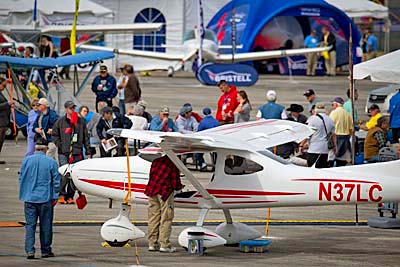 The show started the same year LSA arrived on the scene — barely a month after FAA announced the new airplane and pilot certificate category — as the event was initially held in October before shifting to January to avoid hurricane season disruptions that affected the first year.

Sebring was hardly on the aviation map as the show began. A notable early success was attracting Phil Lockwood and his multiple enterprises. Those who know Phil are aware he is a particularly careful and deliberate planner so his selection of KSEF was significant and perhaps presaged the long and successful run of Sebring Expo.

Over the years, airport executive director Mike Willingham and those he retained to operate the event tried various tactics including a night airshow, adding drone racing and exhibits to the mix, plus relocating the center of activity, finally ending up right in front of the new beautiful airport terminal Mike initiated during his equally long run as the man in charge. 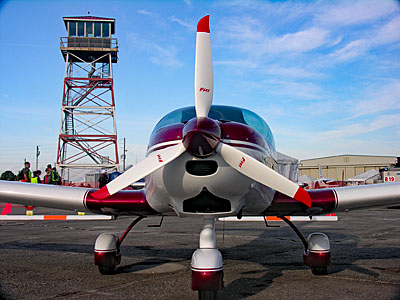 The LSA community embraced Sebring enthusiastically as the new segment roared into the aviation space. Dozens of new aircraft producers and the many customers who loved them enjoyed having an event where LSA and Sport Pilot kit aircraft plus ultralights were the leading attraction.

A primary reason for the event’s success was the sector-specific nature of the show. Pilots could comb the field for the best choice for them and they could take multiple demonstration flights to zero in on the right aircraft for them. The smaller nature of the event assured that prospective buyers could get plenty of face time with suppliers of their favorite LSA or kits and they could have long enough conversations with them to be sure before making a substantial investment in a new aircraft.

“Beginning as a small, local event, Expo has grown to become an international trade show with exhibitors, vendors, and visitors from all over the globe,” reported the airport authority in announcing the event shutdown. “Airport management, board and staff are extremely appreciative of the support shown by exhibitors, sponsors, volunteers, and participants.” 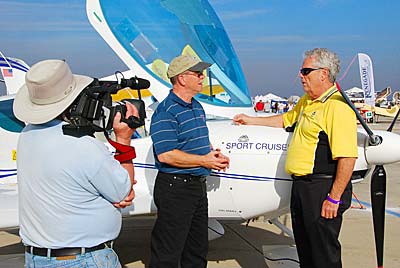 What will Sebring Regional Airport do to promote itself and aviation in the future? “[We] will continue to focus resources and energy toward the development of new programs in emerging aviation areas including manned, optionally manned, and unmanned systems. This focus will include aerial, terrestrial and marine platforms.”

One of the success stories for the Sebring airport is attracting tenants and increasing aviation activity at the airport. The authority assures those tenants and their customers, “Sebring Regional Airport will continue to vigorously support existing aviation-related tenants with a focus on growth and vibrancy of our region. Commitment to all segments of aviation has always been a cornerstone that will continue to be a core value.”

LSA and Sport Pilot kit-oriented enterprises based at Sebring include Lockwood Supply and Lockwood Aircraft, Tecnam USA, Duc Propellers, Sebring Flight Academy run by the folks behind Bristell USA, and AB Flight, a representative for Evektor. Several other companies have also called Sebring home over the 15-year-run of the show.

Another One Bites the Dust

Perhaps the Sebring cancellation is a sign of the times. Another, even better-known series, is also calling it quits. Plane & Pilot magazine’s online outlet reported, “For 16 years now, since its inception in 2003, the Red Bull Air Races have given the aviation world the kind of star power that other motor sports are all about. But the expensive and logistically difficult-to-produce events haven’t created household names, as is the case with other motor sports, though the company didn’t cite that as a cause for its decision.” 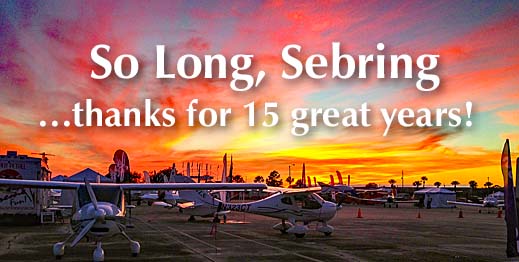 “The news came as a shock,” Plane & Pilot continued, “with the company suddenly announcing on Wednesday, May 29 that 2019 will be its last year. Three races remain for this year’s series, with events in Russia, Hungary and Japan. In all, the series has included more than 90 races.”

So, with some sadness, we conclude our reporting from Sebring with many articles and videos earlier this year. More videos are still in development and people will be telling stories about Sebring for years to come.

Thanks for the memories, Mike Willingham, Bev Glarner, Janice Rearick, Jana Filip, and Bob Woods (leaders of Sebring Expo over the years). You gave it your all and it was good. Blue skies!

For those that want to reminisce, here’s a link to our many stories from Sebring over the years.