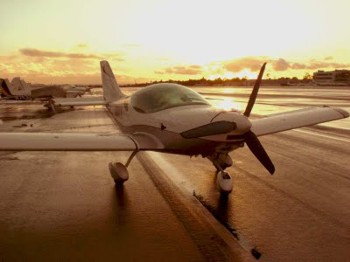 Wrapping (that’s moviespeak) yesterday’s item with Charles Thomson and Santa Monica Flyers, the erstwhile flight training entrepreneur happily reports a good start. “I haven’t done any marketing whatsoever; it’s all been word of mouth. People were waiting for a light sport airplane in this area.” *** Note: Photo at right is Charlie’s SportCruiser. *** That’s a scenario many LSA operations can envy. It doesn’t hurt to be smack in the middle of a huge megalopolis and general aviation mecca either. *** Thomson believes the wish to fly is universal. “Flying provides the connection between man and God. Look at angels: people with wings. It’s sad to me that someone might go through life and never fly.” *** Yet his business philosophy is anything but idealistic: He charges students less than some local schools for instructor time, but gives a greater percentage of the hourly fee to instructors. *** “I can get the best instructors that way. Some schools charge $80/hour…and only give $18 to the instructor! We charge $50 and give instructors more. There’s no need for a school to make a huge profit on that aspect of the training.” *** Student rental rate for the SportCruiser after a modest membership fee is $105/hour wet. Rated pilots can get a block rate of $110/hr. *** “That’s cheaper than most Cessna 172s — which are typically 20 years old and more. I tell students they will probably spend $3,500 to $4,500 to get their Sport Pilot license. That’s been our average.” *** Here’s wishing the best of good fortune to Charles Thomson as well as his “rival” on SMO, Karine Noel, whom I profiled here a few weeks ago here. She teaches on a Flight Design CTLS, which means students have more LSA training choices. *** It’s also kind of a neat update to the classic Cessna/Piper rivalry that’s been part of general aviation, and Santa Monica Airport, for generations.