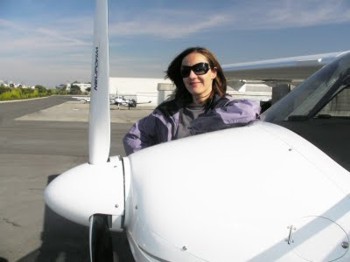 I was out in L.A. last week and had the distinct pleasure to hop a flight out of Santa Monica Airport, an old haunt of mine, with Flight Design USA‘s California sales rep, Karine Noel. *** Karine was a perfect hostess. She’s just set up shop to demo the company’s top-o’-market line of LSA. *** But she’s more than just another pretty face. *** Her GA chops include a stint flying for JetDirect Aviation and CFI/CFII, IFR and Commercial Multi ratings. *** That pedigree should prove a real asset when showing and translating the virtues and nuances of Light Sport flight to GA pilots, who often underestimate the sophisticated handling and performance of LSA. *** We launched in Karine’s CTLS demonstrator on a clear, cool morning, flew out over famed Malibu colony, then climbed to 5,000 ft over the wonderful Santa Monica Mts. to boat around at 120 knots for awhile. *** Now how much better does it get than zipping through butter-smooth skies with a lovely pilot in a new LSA? *** Karine operates out of long-time FBO Kreuger Aviation at Santa Monica. She’s part of Flight Design’s newest distributor, Flight Design West, a division of Lone Mountain Aircraft Sales which operates in Nevada, Oregon, Washington and Montana. *** Prospective buyers can contact her here for information and a demo flight. Karine can also arrange for LSA flight training in the area. *** Flight Design West has also set up repair centers in Santa Monica and Portland, OR to support the more than 300 CT aircraft already flying in the U.S. (There are 1400 operating worldwide).