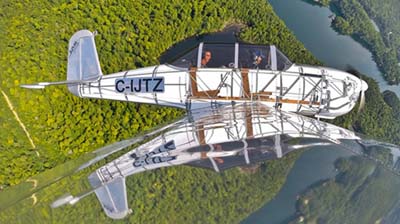 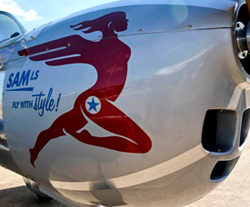 Hey, buddy, wanna buy an airplane company? Thierry Zibi, proprietor of SAM Aircraft, has put his company up for sale. This decision comes only a year and a half after the first flight of the prototype Sam aircraft. I flew and reported on this tandem seating all-metal airplane. Several other reporters flew the Sam LS and reviews were favorable. Some have likened the design, which Zibi spent years developing, to a Light-Sport version of a early military fighter or trainer modeled somewhat after the Ryan STA. It was done with a style that is uncommon among aircraft designers. An attention-getting image (photo) released just before AirVenture Oshkosh 2014 shows the innards of the airplane appliquéd to the fuselage exterior. Like the logo, nose art, and other aspects of the design, the effect is one reminiscent of art deco, an art fashion of the 1920s, ’30s and ’40s. After all the work of creating a new design, why would the entrepreneur behind it put the company on the blocks?

Like many before him — in and outside of aviation — Zibi realized that his interest dissipated once the “fun” part was over and the work truly began. “I came to the realization that I love designing airplanes, but I am not so keen on running a production company,” said Zibi. It may be the right time for a business manager type to take the reins. Sam Aircraft has flown a full test regimen, which the company said, “has shown it to be spin-proof at both full-forward and full-aft center of gravity.” Canadian certification has been awarded under the country’s Advanced Ultralight regulation and proof to demonstrate compliance to ASTM industry consensus standards has been “completely documented, awaiting only another production example,” added Thierry. He observed that tooling and fixtures are done, production has already started, and orders are in the books.

“Come to Lachute, Quebec,” Thierry invited, “and see the LS aircraft, the factory, and everything that is part of the Sam Aircraft legacy. See what convinced our customers to put down their deposits, and you’ll have a ready-to-go operation, for dimes on the development dollar, for a tested, ready-to-deliver design to add to [your] existing line.”