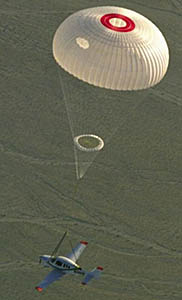 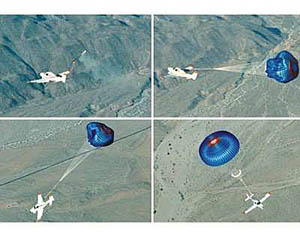 Step-by-step view of a BRS rocket-deployed parachute deployment from the Cirrus SR20.

Watch the video. Open your mind. Put yourself in this cockpit. Imagine it happening to you. Think of the people you love and who love you. *** Dan Johnson wrote about this yesterday in his blog post (my writing home away from home) with some tasty comments based on his years at BRS parachutes, so I’ll direct you there for his in-depth overview. *** My purpose in posting here is more personal. I want you to fly safely your entire, long life. *** But any pilot — and you know who you are — who has so far convinced him/herself that an airframe parachute shouldn’t be an essential component of any aircraft, please watch the video. *** Then try to make a rational argument afterwards against recreational aircraft carrying onboard chutes. *** Yes, the pilot is engaging in high-stress aerobatics, which the vast majority of us will never do. And yes, you can make an argument that carrying a chute increases your likelihood of taking more chances in the air because you feel you always have a backup. *** But do you drive more recklessly because you buckle up in your car? Most of us don’t. I think this is not a strong argument against having one when you might need one… because if you don’t have one, you’ll never need one again. That much we can say with certainty, as would the young pilot in this video. *** Finally, who can say with certainty that nothing catastrophic will ever happen to us in flight? Nobody. Absolutely nobody.
Scroll down to see the video below or click here.
*** I bet you know somebody who would be alive today if they’d had an airframe chute on board. I can think of several over the years… friends and colleagues I miss, some a great deal. I think sometimes about how their families must miss them still. We never forget the people we love.
*** BRS Aerospace keeps stats on their saves. The tally is now 253 people who are still alive because of this technology, including the young man here who walked away unhurt after losing an entire wing just 700 feet above ground. *** If you want to cut to the chase, fast forward 1:50 into the video to see the breakup itself, and watch the rest for a slow-motion replay. *** Here’s what’s remarkable to me: • How fast the pilot deployed the chute… and still the main lanyard connected to the chute seems to have wrapped around the fuselage at least once, which is why I think it descended — very slowly as you’ll notice — in a nose-down attitude. • How quickly the chute deployed even with the high-speed rotation around the roll axis • How the pilot was completely unscathed, though as Dan reports the airplane caught fire after “landing” and burned up (more pix on his site). *** I’m going to beat this drum until the drum breaks, then I’ll get another one, because airplanes are mechanical devices. Something, in time, will fail. You can count on that. We don’t need to fly in fear, but we shouldn’t kid ourselves either. Why not be as safe as we possibly can? *** The other day I pulled into a rest stop on the interstate, opened the door, and watched as a tide of oil ran out of my engine onto the asphalt. I called it Mini-Gulf of Mexico because five quarts makes quite a flood. *** Four hours of cleanup and an auto tow later, the mechanic told me the engine drain plug had unscrewed, although it took 2,000 miles since the last oil change — at the VW dealer — to do so! *** Again, my point: an airplane is a mechanical device. Something can and will fail in time, and you might not catch it in a preflight. *** Or you might hit a bird or an airplane and be disabled and unable to land safely. *** In the news, a high time pilot had a midair the other day and was killed. It happens, and piloting skill or lack of it had nothing to do with his death. *** With 35 pounds of parachute on board, you’ve got a hole card against the unknown. *** Why wouldn’t you want that? Why wouldn’t your friends and loved ones want that for you? *** The young pilot in this video was 5 seconds from losing his life after that wing let go. Instead, because he was smart enough to install an airframe parachute, he’s got one hell of a story to tell for the rest of his life, and a family and friends who will welcome him home for all the years ahead. *** That’s an incredible exchange for a few thousand bucks and 35 pounds of weight, wouldn’t you say?