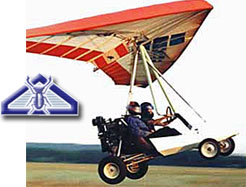 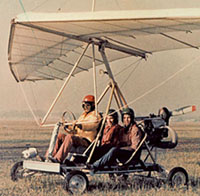 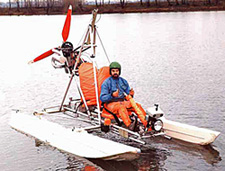 News from Russian sport aircraft producers is rare. Though the old USSR had a vast military aircraft complex that hasn’t translated to recreation aircraft the way it did in the formerly Soviet Czech Republic, where many of our LSA originate. However, that doesn’t mean efforts are absent. We’ve seen some uptake of LSA (like Pipistrel) into Russia but here I’ll portray an unusual Russian development. It may not find a U.S. market but I find it intriguing.

The designer, Anatoly Geralevich Szukov, calls his work the result of “garage aviation,” a surprisingly American term (think: Apple computer coming from Steve Jobs’ garage) for a very different project… from Russia. Instead of meaning a source of innovation, however, Szukov uses the garage term because his development allows people to store their aircraft in a normal garage. Szukov’s U.S.-based contact didn’t provide an English name for Szukov’s company (though if you read Russian you might deduce it).

Szukov’s “Bug” line of trikes are commonly powered by a Russian injected VAZ 21083 78-hp engine though he offers other powerplants Americans would recognize such as the Rotax 582. Besides the Ruskie engine, Bug’s distinguishing characteristics are four wheels, side-by-side seating (almost never seen in a trike), and a variety of chassis bodies. Oh… and catch that highly unusual ring-wing design.

Szukov identifies his trikes as “BUG-41” (a single seater), “Bug-42” (a two seater), “Bug-43” (surprise! …a three seater). He also refers to “Bug-44,” (photos) which is apparently all of the preceding based his four-wheeled “trolley” or chassis. Szukov’s website says four wheels adds only about 37 pounds including the steering mechanism and provides much better ground stability. He also feels it is more intuitive to a beginner than traditional wrong-way trike steering and that the added structure is safer when involved in an accident.

“Four-wheel carts [compared] to the three-wheeled device significantly improved stability at launch and landing,” he wrote. “Significantly, this property of trikes is shown at takeoff and landing on unprepared sites, especially in rural areas.” Szukov adds his belief that the four-wheel carriage increases comfort, allows easier and safer training, and lowers the center of gravity, resulting in increased stability and safety compared to classic trikes where the passenger is above the pilot.

The Bugs share many advantages with more conventional trikes, or weight-shift LSA in FAA parlance: easy transport, smaller hangar use, versatility, low cost, and more. Szukov sees a good future for his creations in many parts of the world, and indeed, trikes have found markets in many emerging countries.

If you want to find out more, the Russian language website has challenges but Google Translate will do a fair job. Otherwise you can write the factory or their Atlanta, Georgia-based Russian contact, Victor Vaiovod.