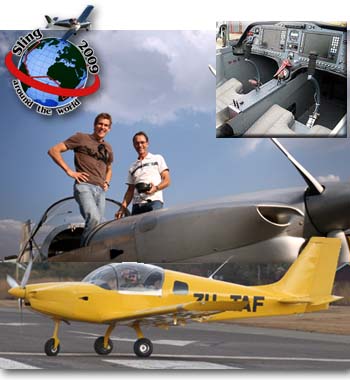 Off to see the world… all of it! Mike Blyth (on right) and James Pitman will fly their new D6 Sling around the world, stopping at Oshkosh. Come see Mike, James and their Sling in the LSA Mall if you’re headed to AirVenture.

Normally I don’t write about record attempts or exceptional flights until they are completed and even then only if they are significant. Too many grand voyages end prematurely. But I’ve known Mike Blyth for decades and he’s already accomplished several daring flights. For example, his South to South expedition went from the southern tip of South America up through the USA across the Atlantic through Europe and back down to South Africa, all in weight-shift trikes. Plus they made a very watchable movie from this large experience. So, if Mike says he is launching Around the World Expedition 2009 with a stop at Oshkosh on the way, we need to pay attention. Mike and his business partner James Pitman leave South Africa on July 17th and AirVenture begins the 27th. So, throttle up, boys! *** The trip is unusual in a few ways. One, their Sling LSA — from the business the two aviators co-own, called The Airplane Factory — has just completed flight testing. Secondly, this flight will take place near the equator requiring some very long legs over water. Thirdly, they will go west around the globe; most go east. *** The duo will make their 28,195-mile flight in the brand new D6 Sling, except they say they’ve modified this airplane to hold 118 gallons of fuel (about 24 hours worth!). A regular Sling will carry 29 gallons of fuel. Cruising at about 115 knots, they’ll have to log more than 200 hours to get back home.