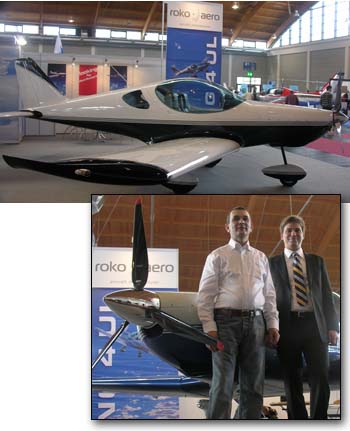 AERO 2009 NEWS — Milan Bristela (L), a major contributor to such designs as the SportCruiser, Mermaid, and Parrot, poses with his financial partner, Antonin Kocar, at Aero 2009. Look for the NG 4 LSA at Oshkosh and have a 3D viewing now.

The troubles of Czech Aircraft Works (CZAW) in their titanic battle with financier Slavia Capital are known to some readers. Despite this challenge the American-run, Czech-based company increased the fleet of their SportCruisers by 69% in 2008 (a notable achievement given the terrible economic conditions). *** One of CZAW’s key people didn’t stay through the war that ensued between company management and money people. His name is Milan Bristela and he is a talented designer who preferred to focus on airplane development rather than corporate politics. His disappearance from the payroll of CZAW became clear after he launched his own aircraft in December 2007. The NG 4 UL is presently selling in Europe and the NG 4 LSA will come to America, probably by Oshkosh 2009. *** NG 4 bears a clear resemblance to the SportCruiser, which design counted Milan as a key developer. Roko’s design brings changes to differentiate the product and first flew in mid-2008. The Czech company has been adding dealers in European countries and has made preliminary arrangements with a U.S. distributor, United States Sport Aviation. NG 4 LSA uses the 100-hp Rotax 912S, paired with a ground adjustable Woodcomp Klassic propeller and features a 50.7-inch wide cabin.