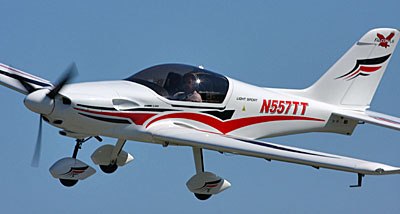 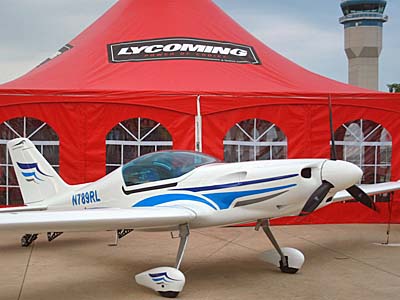 Falcon, which uses Lycoming’s LSA powerplant entry, was shown in front of the engine manufacturer’s tent at AirVenture Oshkosh.

For 18 months, we haven’t seen much of a sleek low-wing airplane called the Falcon LS. Even its name was challenged by French bizjet maker, Dassault Falcon, because … well, you know, someone might be confused. However, Renegade Light Sport Aircraft operator Doc’ Bailey is not an idle man waiting for the weeds to grow between his toes. He’s been busy creating his SPAR race circuit and — even though he had to relocate again after moving from Missouri to Florida (he’s now happily quartered at the sport aviation-friendly Deland airport) — Doc’ has been quietly plugging away on his Falcon line. He’s also kept his spare time to a minimum representing the D-motor video and the B.O.T. Super Cruiser, while simultaneously creating his Lil’ Rascal version of the Pitts S1 biplane. OK, so he’s busy but what about Falcon?

VX Aerospace is an advanced composites company near the Appalachian Mountains in Morganton, North Carolina. “VX Aero designs and manufactures a wide range of tooling and parts for automotive and heavy-truck applications, and even carbon fiber-reinforced composite ceiling fan blades, aerospace structures are its core competency, wrote editors of Composites World online. VX’s top engineer and founder is Bob Skillen — a degreed aerospace engineer and ex-U.S. Navy F-14 aviator with more than 25 years of experience — who has taken on the project of fabricating all carbon components of the Renegade’s Falcon. On May 1, 2014, Composites World wrote, “Currently, two composite aircraft projects occupy the company’s 17,000 square foot production space. The first is the Falcon, a sleek, low-wing, high-performance sport aircraft esteemed by some as “the Ferrari of light aircraft.” Originally built in Hungary, a handful of the planes made it to the U.S. before the manufacturer, Corvus, went bankrupt. A groundswell of demand spurred an effort to put the plane into production in the USA. Via a memorandum of understanding with Renegade Light Sport Aircraft (Deland, Florida), VX has assumed responsibility for design, engineering, tooling and manufacture of the Falcon airframe, while Renegade controls sales, marketing and FAA certification.” In a telephone interview, Doc’ was effusive about the capabilities of VX Aerospace and he anticipates the arrival of all CAD-redesigned parts in Deland where his team will begin producing Falcons. He did not expect the first airplane by AirVenture 2014 but hopes the model will fly shortly afterward.

The majority of LSA are powered by Rotax and a good number are propelled by Continental, while few use the Lycoming. However, this powerplant is a favorite of many American aviators and Renegade is leading the charge to use them. Doc’ has installed the newest LSA-version of the Lycoming IO-233 on his Falcon LS. “The IO-233-LSA is a sister of the ubiquitous O-235 (powering the majority of Cessna 150/152′s flying today) sharing most major components,” reported Doc’. Lycoming’s IO-233-LSA accepts both no-ethanol mogas and avgas and offered fuel injection even before Rotax introduced their 912 iS in 2012. “Lycoming also includes a triple-redundant, dual-electronic ignition system for increased simplicity and decreased weight,” added Bailey. The Falcon LS was reportedly the first airframe to fly the new IO-233 on October 6, 2010.