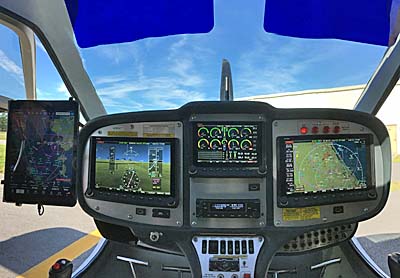 John Hurst’s futuristically-equipped Flight Design CTLSi with not two, but three Dynon screens (two 10-inchers + one 7-incher) plus a post-mounted iPad. See any round guages?

When Rotax moved their 912 iS Sport project from engineering to production, the big Austrian engine manufacturer elevated their already-immensely-popular 9-series engines to a higher level. Beside fuel injection, the company added electronic engine controls more advanced than any other in their inventory.

If you’ve flown with the iS Sport as I have you know it has terrific performance — torque was increased through an enlarged airbox along with other minor refinements — plus it gives even better fuel consumption. When flying with Aerosports‘ Jeremy Knoll at DeLand 2017, I heard that his trip from Wisconsin to Florida in the TAF Sling yielded fuel consumption rates of 2.7 gallons per hour at cruise. Man! That is some fuel efficient flying and that is part of what Rotax achieved with their iS model. They will use that technology plus more on their coming 135-horsepower 915 iS due on the market next year.

However… “Houston, we have a problem. I’ve got a red light here on my panel.” We pilots are rightfully hesitant to commit to flight with a big ole red light glowing back at us from the instrument panel. Oh, dread!

Thanks to avionics guru and pilot extraordinaire — and a friend — John Hurst of Sport Aero Services, I learned Dynon has made the red-lane-A/B-light challenge a source of knowledge rather than frustration. 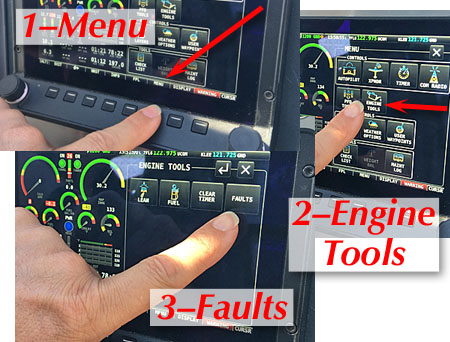 I was one of those frustrated pilots, thanks to early experience with Lane A/B lights.

I had flown with a flock of Light-Sport Airplanes to the Bahamas. We had long over-water stretches. When you fly out of sight of all land in a single engine airplane, the pucker factor tends to rise.

Being a modestly-experienced Bahamas island-hopping LSA pilot, I figured to take off last from the Nassau-to-Bimini flight. The other pilots fired up, taxied out, and launched into the air. My cabin mate and I, aviation journalist James Lawrence, tried to follow but on firing up, I had a red lane B light that would not go off after doing the usual checks. I would not commit to flight over lots of water with a red light staring back at me and I had no one nearby to consult as to the problem.

Therein lies the problem. What was wrong?

It turned out to be a connector that did not maintain contact. Nothing whatsoever was wrong with the engine, explaining why the light went off later and we were able to launch and fly without incident to the other island. Nonetheless, whatever that had been nagged at me, stealing a bit of the joy of flight as I was uninformed. 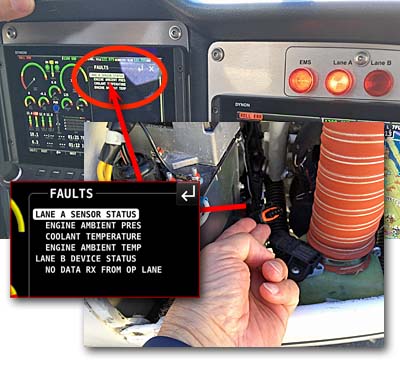 No more, thanks to Dynon and guys like John Hurst who works closely with the west coast avionics provider.

Now, as the images show, you can ask your Dynon HDX Touch SkyView instrument for the reason, and it will list for you what is wrong. Some problems need to be fixed when able. Others might have to ground the flight until remedied. Wouldn’t you want to know which it is?

“This update happened partly because of your early experience, Dan,” clarified John. “Now the pilot can know the reason the light came on and can make an informed decision.”

Thanks, John and Dynon. I’m breathing easier and future flights will have all the joy in them as promised by our love of flying light aircraft.