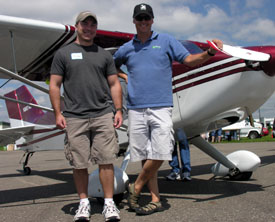 One Sport Pilot enthusiast who flew with Randy at the Sport Pilot Tour was my physical therapist, Blake Beutow (left). Blake and others have been helping me regain strength after my April accident; I’m happy to report excellent progress. So, it was a pleasure to reward Blake’s services by arranging a couple demo flights.

At the Minneapolis Sport Pilot Tour, RANS exhibited their S-6 and S-7LS. At a fly away price of $75,000 S-7LS Courier SLSA represents a strong value. Coyote S-6 remains a 51% kit, one of the most popular in the world. Either can be flown with a Sport Pilot Certificate. Earlier this year the Hays, Kansas company abbreviated their line to their best sellers (S-6, S-7 & S-12) *** New Light Sport Aircraft from RANS are still in development. Designer Randy Schlitter has already announced his low-wing S-19, but he told me of S-20, a high wing variation using many of the same components. This could smartly establish RANS against Euro designs like Italy’s Tecnam with their high wing Bravo and low wing Sierra, which also share components. Look at the entire RANS family of planes. (The RANS website has no info on S-20 yet.)