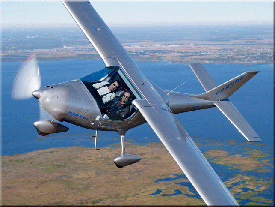 The Czech Aircraft Works Parrot is represented in the USA by Sport Aircraft Works of Florida. It’s a fine plane that I enjoyed flying and is part of their family of Mermaid amphibian and Sport Cruiser.

A lot of folks have asked what happened in the accident I sustained (April 17th SPLOG). It’s a fair question. Pilots can learn from accidents. So, here’s my replay: First, any accident I’ve ever investigated had multiple causes and so did this one. The Czech Aircraft Works prototype Parrot is a fine plane with which I have only minor complaints — and I expect they’ll fix every one by the time it goes into production; this is an experienced company with expert engineers and developers. But on April 2nd, the Parrot’s Rotax 912S engine didn’t make full power. It revved only to about 4300 rpm, not the expected 5600 rpm. My contributing error, therefore, was not immediately aborting the flight after seeing less than full power. I was number one in a flight of two aircraft. The number two was behind me and while I didn’t dwell on his presence, it may have been one reason I didn’t abort. But also, this engine usually provides a LSA with plenty of power and I simply wasn’t that concerned that it wouldn’t lift above the fully tree-lined runway (which was otherwise of sufficient length). I lifted off in ground effect and seemed to climb almost normally though not as fast with full power. When I rose above ground effect and saw I was barely above the tree tops and not climbing, I had my first twinge of real concern. I tried an aggressive turn down a perpendicular runway but I couldn’t make the turn so I turned back to the east runway heading. The sharp bank robbed me of more altitude and now I was running out of runway. Since I was flying a one-and-only Parrot heading to Sun ‘n Fun, I didn’t want to damage the plane. Because I needed braking power to stop before the trees at the end of the runway, I chose to plant the gear firmly on the ground and hoped to stop in time. I hit hard, breaking one gear and veering off into trees and brush on the side of the runway. Despite my effort to save the bird, I damaged it substantially and hurt my back in the process. I was solo in the plane, have flown other comparable planes with this much power and often not needed full power so I convinced myself I could continue. As another friend noted, I also had a lot on my mind with Sun ‘n Fun about to start. I had a zillion things to do at that show and while I don’t believe I was thinking about it, it surely was part of my mental process that day. Here’s my two new personal rules of flying (adding to a long list that helps me not do dumb stuff in aviation): (1) I will always abort any flight that has less than full power showing even if full power is not needed to launch. (2) I will no longer conduct a flight of two as I believe it limits options for the pilot. OK, this will end my accident update…next SPLOG will return to airplane info.