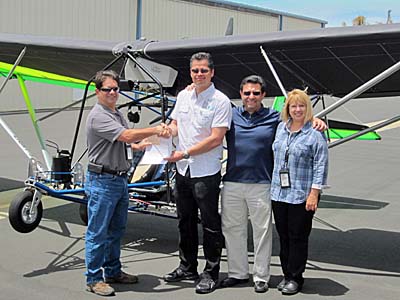 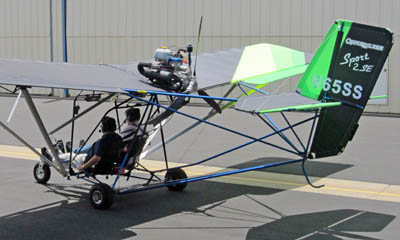 “We feel very satisfied that the last milestone to finish our SLSA project has been completed,” Escutia noted. “Dan Perez did an outstanding job leading our company team to this achievement.” 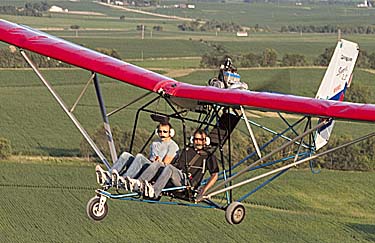 Quicksilver reported the Sport 2SE will be shown and flown at EAA AirVenture Oshkosh 2014 at the end of July. photo by James Lawrence

Plenty of longtime light aircraft enthusiasts have wondered when Quicksilver would enter the SLSA sweepstakes. “On June 26th we received the airworthiness certificate and the operations limitations document for our Sport 2SE Special LSA after a three-hour inspection from the FAA,” said Quicksilver Aeronautics President and CEO, Will Escutia. Earlier the company reported successfully passing an intensive FAA audit, but a final aircraft inspection by FAA personnel was still needed. Aviation Safety Inspectors, John Soltis and Kym Robbins, provided the pink airworthiness card at the French Valley Airport (photo), approximately 10 miles from the company’s factory. Soltis expressed his congratulations saying the airplane “looked very good.” At near the industry’s lowest cost — $39,999 for a fully built Sport 2SE — those Light-Sport fans who fret about the high cost of some (exceptionally well equipped) airplanes now have a very affordable choice. If $40 Grand is still too much you can buy a Quicksilver ELSA or Experimental Amateur Built for even less.

Quicksilver is doing something else that is entirely different in a first for the industry. They have established three manufacturing points in the USA: the Temecula, California factory serving the west; a facility in Reserve, Louisiana operated by the company’s longest lasting and most successful dealer, Air-Tech, Inc., serving the south; and longtime company sales manager, Todd Ellefson, who will now run a manufacturing and dealership operation serving the north (email). ASTM standards and FAA rules address multiple manufacturing outlets when the manufacturer assures quality control and operation processes of their remote outlets. Quicksilver is pioneering the use of this arrangement and will also establish similar facilities in countries like China where they just signed a major order for 77 aircraft. In all, the wait by some enthusiasts for this brand to get in the LSA game is over and Quicksilver is ready to leap ahead with their plans.

In operation since the early 1970s (that’s 40+ years, folks!), Quicksilver can lay claim to delivering more complete light aircraft kits than any manufacturer I know. They’ve delivered out more than 15,000 kits, a significant number of which are still flying in more than 100 countries. Now adding ready-to-fly models, Quicksilver is ready to move forward aggressively. (I must note that for many years the company has also made Part 103-eligible aircraft which could be delivered ready to fly by any dealer.) As Quicksilver ramps up production of the Sport S2SE, they are also at work on the SLSA version of the GT500 tandem two seater. This well-received aircraft was the very first Primary Aircraft category aircraft to win FAA approval – way back in 1993 – so that effort to gain SLSA acceptance from FAA should pose few challenges. New owners Will Escutia and Dan Perez took over in 2012 and in two short years have seriously increased the company’s activity. Congratulations to the two new owners and their whole team. You can see this aircraft and nearly 20 more in EAA’s 10th Anniversary Celebration space near the main plaza at AirVenture 2014.