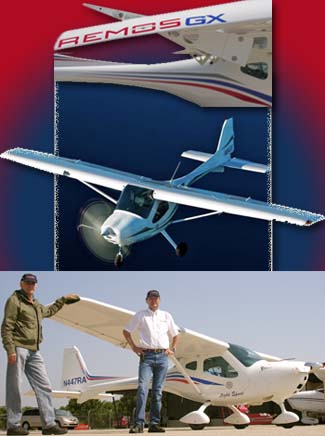 After announcing the selection of the GX as the 2010 giveaway airplane AOPA leaders are surely breathing a sigh of relief now that Remos issued a reassuring statement. Earlier rumors threatened to cast doubt on those who participated in the Sweepstakes announcement (including yours truly).

Along with others in the LSA world, my email inbox has been overflowing with questions and comments about Remos filing a “notice of insolvency” back on November 30th, just three weeks after AOPA chose the company’s GX as the 2010 Sweepstakes airplane. *** Today, the company issued a press release on the subject. Management reported, “Remos Aircraft has received an additional significant investment. With this new capital injection, Remos Aircraft goes strengthened into the year 2010.” The news release did not address the notice of insolvency, but earlier comments indicated it would be “withdrawn” once matters were settled among investors. According to sources, the filing was necessary under German business law because of a “temporary liquidity problem.” *** In the press statements, Remos managers reported they are “dominating the LSA segment, and with significant progress in building our marketing and sales organization, we have reached the goals we had set ourselves for the year 2009.” To further identify the sources of capital investment, Remos elaborated, “The steps initiated by the two main shareholders, the Faerber Group of Munich, Germany, and the London investment house Pall Mall Partners… secure the future of Remos Aircraft and enable the introduction of new programs through which the company will be able to address new customer segments.” *** VP of marketing Ken Weaver added, “We are now ready to launch the next phase of our program.” Ken is presently traveling home from Germany and I may have more to report here in a few days.