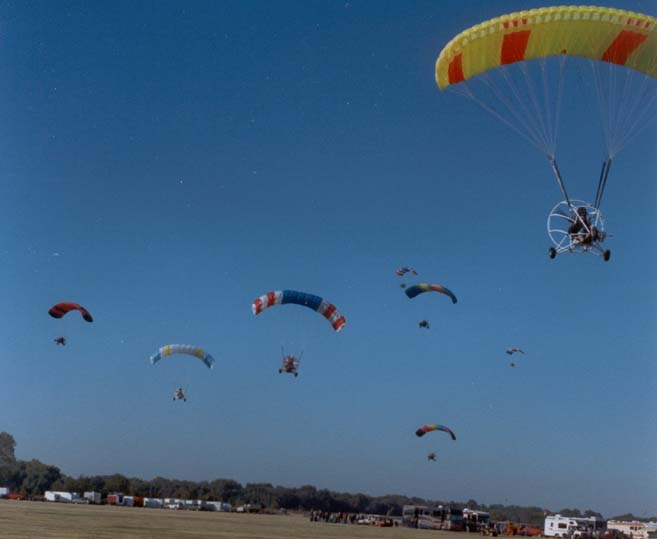 With 215 powered parachutes in attendance at the Extravaganza, filling the skies was no problem. 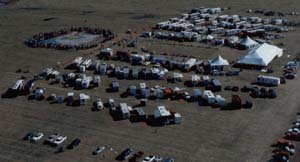 The Extravaganza attracted much of the powered parachute community. A large crowd of motorhomes and trailers made it to the event. 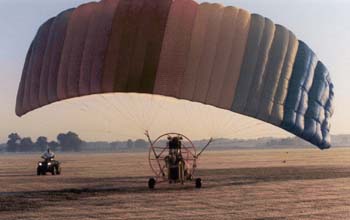 A powered parachute inflates its canopy on Powrachute’s wide-open field in Columbus, Kansas. 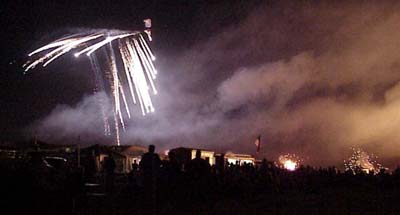 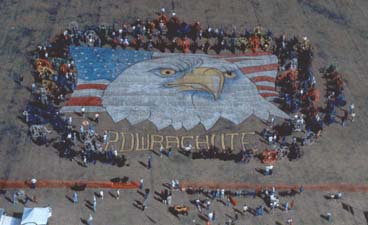 A rather dramatic airbrush job shows the company name at the bottom highlighted by a 15,600-square-foot patriotic mural. 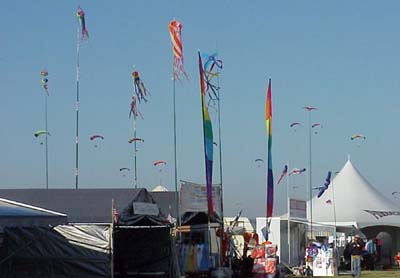 Only three weeks earlier, our nation had endured wrenching emotion from the September 11 attacks. But life must go on.
So Powrachute of Columbus, Kansas, went on with its third annual Extravaganza. One look at the grounds promised that this was to be no ordinary company fly-in. Most of them resemble a family picnic; this one looked like an airshow.
For the 2001 Extravaganza, Powrachute reported an attendance of 5000 spectators. Greeting them in this year of uncertainty was a beautifully airbrushed bald eagle against an American flag backdrop. The art took up 15,600 square feet of the flying field.
Mass Launch
Extravaganza participants came from 29 states plus Canada, and they brought 215 aircraft. Much like the giant hot-air balloon fiesta in Albuquerque, New Mexico, the Powrachute gathering provided a great photo opportunity to capture the large and colorful wings of aviation’s newest segment.
On one occasion during the four-day event, a launch of powered parachutes put 80 of them in the air in 20 minutes. I’ve seen Albuquerque launch a whopping 600 balloons, but this many powered parachutes moving about the sky has more motion and is a sight to see. Competition was also part of the event.
All attendees at the 2001 event had a chance to win one of two prize aircraft. A Powrachute PC2000 was presented to Frederick Wright of Denver. A newcomer to powered parachuting, Wright will receive training and his new machine at Sky Trails Ranch in St. George, Utah.
Powrachute introduced its first single-seater, the Sky Rascal, last year. One of these new craft was given away to Mike Peterson of Carthage, Missouri. To qualify, you had to be a pilot with a registered powered parachute. Mike will be selling his new rig to pay for some recent eye surgery, but everyone agreed this was a worthy result of Powrachute’s largess.
High Lights
Performing in the evening was Powrachute owner Bill Amyx, flying a powered parachute rigged with an elaborate fireworks apparatus. His specially configured Powrachute has 74 tubes of various sizes filled with Roman candles that resemble missiles departing in many directions.
From the cockpit, Amyx controls a panel with 25 electrical switches to detonate the display. Tubes mounted all around the aircraft are carefully aimed so they don’t fire into the vulnerable nylon wing canopy. Amyx does all his own wiring and connections.
Amyx’s show lasted 8-10 minutes and was complemented by a ground fireworks display that took a team of five 4 hours to rig. More than 2 miles of wire was used to set off the electric “matches” that ignite the fuses.
When preparations were complete, Amyx gathered his assistants for a briefing; he remains in contact with them by radio once he’s aloft. Because he flies within a few hundred feet of the ground-based pyrotechnics, the whole show must be well coordinated. “I must say it is quite an experience having all those fireworks going off all around you while flying through it. I love it,” he said.
Checking Out the Powrachutes
At last year’s Sun ’n Fun fly-in, I flew one of the company’s latest PC2000 models with longtime skydiver and powered parachute instructor Scott Hughes. Powrachute is a recent entry to the increasingly crowded field of powered ’chute builders, but the company has already established a distinctive style.
While most of the 22 manufacturers of these ultralight vehicles use a collection of aluminum tubing connected with aluminum channels and gusset plates, Powrachute takes a different approach, using exclusively large-diameter tubing that’s curved gracefully to avoid the numerous bolted joints common on other machines. The result is a beefy-looking machine that takes half the time to assemble and projects a curvaceous appearance.
One unique aspect of the PC2000 design is the addition of frontal fuselage bars. This array of tubes surrounds the cockpit, protecting the occupants from danger in case of a rollover, which can happen if the machine is handled incorrectly. A ’chute 20 feet above the machine can exert a significant pull, potentially upsetting the chassis. Some manufacturers provide smaller rollover bars, but none is as solid and reassuring as those on Powrachute’s PC2000.
As Hughes and I flirted with treetops surrounding the main landing site at Sun ’n Fun, I realized the other benefit of the frontal fuselage bars. In a powered parachute with its wing far overhead, it’s not unreasonable to fly close to obstacles given the slow flying speed of these machines. At times, Hughes and I flew surprisingly near tree branches, and although this is threatening in most aircraft, you can get much closer in powered parachutes—assuming you use a great deal of caution and have lots of experience with the machine.
Should you get too close, the frontal fuselage bars offer a measure of protection…as they will also if a fence jumps in front of you on a poorly planned landing. This is not to advise haphazard flying, but we all make mistakes, and extra protection can spare us to learn lessons for future flying.
Power Up Your Own?
I must admit, I hadn’t been a big fan of these “bag-wing” flying machines. They seemed too limited. But I got a new appreciation for their special qualities (like the proximity flying described above) after evaluating two of the breed at last year’s Sun ’n Fun airshow.
Powered parachutes are slow, but that’s some of their appeal: The ground drifts by leisurely enough that you can fully take in the scenery. Flying close to the ground is also relaxing when you’re only moving 26 mph, the typical speed of powered parachutes.
Powrachute, like many of its competitors, features a sturdily built chassis that can take quite a whack without injury to itself or its human cargo. The two-place rig sells for $15-18,000 while the new single-place Sky Rascal is available for $10-11,000. KP
FOR MORE INFORMATION, contact Powrachute at P.O. Box 524, Columbus, KS 66725; call 316/429-1397; fax 316/429-3827; e-mail eddie@powrachute.com; web www.powrachute.com
To review all “Light Stuff” columns that have appeared in KITPLANES®, visit www.ByDanJohnson.com, which links to the KITPLANES® web site.