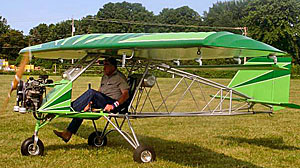 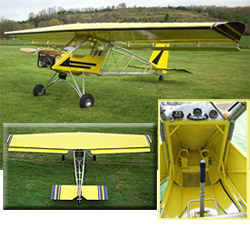 Backyard Flyer UL is available in taildragger or nosewheel versions and can even have doors (with lighter tires). Individual foot brakes are included. Check specs here. photo courtesy Valley Engineering 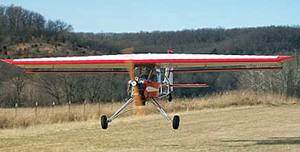 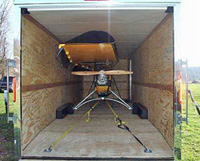 A trailer to fit the Backyard Flyer UL with its wing swung back 90 degrees is available for $7,000. photo courtesy Valley Engineering

One of my joys at AirVenture 2011 was visiting a seemingly revitalized Ultralight Area. Though a shadow of its former self in the 1980 heydays, new life seemed to be springing up, whether through electric powered aircraft or affordable Part 103 fixed wing designs. *** Proving the naysayers wrong (again!) were at least two intriguing Part 103 airplanes you can buy and fly today for less than $20,000. That’s well the under the average price of a new automobile for a ready-to-fly aircraft with desirable features, not a stripped-down machine that no one really wants. I wrote about Terry Raber’s lovely little Aerolite 103. A day after looking over his work, UltralightNews and I shot a video review of the Valley Engineering Backyard Flyer. Once again, I had my eyes opened. *** If you’ve ever visited AirVenture’s Ultralight Area, odds are you saw a pilot known as the “Flying Farmer” doing circuits of the Ultralight Area pattern. Seemingly a different (though vaguely similar) aircraft would do pattern flights each year accented by a throaty, guttural four-stroke sound that did not mimic the ubiquitous Rotax or the smooth Jabiru, or even the also-distinctive-sounding HKS. Powering the Flying Farmer’s aircraft was a Generac generator motor converted to airplane use. It pulled aloft a welded aluminum structure under a semi covered, or semi enclosed, aircraft that also didn’t imitate any other airframe you saw. They all looked to fly energetically. *** I refer to Gene Smith (the “Farmer”) and his Valley Engineering airplane designs. All feature Culver Props as well because that’s the most famous brand in the Valley Engineering family. *** Now Gene’s son, Larry Smith, is the front man for their newest-yet Backyard Flyer, a legitimately Part 103 aircraft that looks as solid as much heavier aircraft — “251 pounds even with tricycle gear,” said Larry. Welded aluminum permits larger diameter tube-frame construction that has a reassuring beefiness to it. *** Perhaps the most unusual feature of this not-like-the-others airplane is the swing wing. Four bolts allow movement on a “turntable” so the one-piece wing pivots 90 degrees to sit over the tail and protrude beyond the nose. The “swing wing” requires a 30-foot trailer but would truly be useful in a crowded hangar as it measures only 83 inches wide. Aileron disconnects took a couple minutes; the whole process didn’t consume five minutes. *** Backyard Flyer UL pricing could not be better: “$19,500 open cabin ready-to-fly; $20,000 enclosed.” That includes a four-stroke electric-start engine plus ballistic airframe parachute. *** Soft-spoken and straightforward, Larry Smith’s easy-going nature belies an active organization that apparently never sits still. (They’re also investigating electric power and hybrid, but that’s a story for another article.) Prop, engine, two seater, or Part 103 single seater, even the trailer… all come from Valley Engineering. Nearly a self-sufficient airplane producer, Valley sticks tightly to its goal of highly affordable airplanes for anyone who wants to fly.