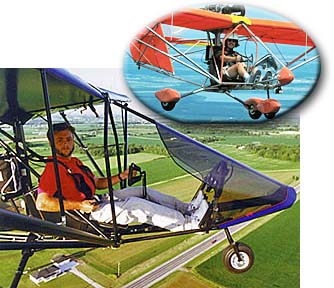 Aerolite 103 is, as its name implies, a legal Part 103 ultralight vehicle. Read my Aerolite 103 pilot report

Being a true 103 ultralight vehicle, you’ll have to be a pilot to fly an Aerolite 103 but don’t need any pilot certificate from FAA. photo courtesy Streamline 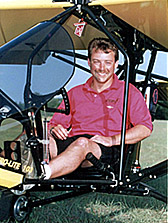 Original designer Terry Raber again leads his company and will professionally build your Aerolite 103… for less than $15,000!

Many pilots speak of airplanes they cannot afford. Indeed, $150,000 Light-Sport Aircraft are priced beyond common budgets. One way to solve this is through a partnership or fractional ownership… and I will be writing about partnerships later this year. *** Another way involves a ready-to-fly aircraft for under $15,000. You read it right: $14,995 for a ready to fly aircraft with many features you want including electric starting, flaps, brakes, tricycle gear, and instruments. I must also mention it successfully meets U.S. Part 103 ultralight regulations. Plus, it is great fun to fly! *** Welcome back to Terry Raber’s brilliant Aerolite 103… literally brilliant in day-glow orange (photo). An amazing value, let me list a few of the standard equipment items: Factory-built; Hirth F-33 engine with electric start & battery; nose fairing & windshield; instruments including airspeed, altimeter, tachometer, EGT, CHT, and clock; electric flaps; steerable nose wheel with suspension; and four-point restraint system (this list does not include everything you get). The only option I’d advise is the airframe parachute, which brings added safety and does not add to empty weight, per FAA. It does add $3,500 of cost. *** Aerolite 103 won’t fly 120 knots like an LSA; it can’t, legally, as Part 103 aircraft are limited to 63 mph. The also-mandated five gallons of fuel may only provide a couple hours or so of duration, so if you simply must fly from New York to LA, this isn’t your bird unless you have time. Admittedly, even at 120 knots, most LSA owners will never attempt such a long flight. But Aerolite 103 can provide years of fun at 55 mph and in a smiles-per-mile evaluation, the finest equipped LSA cannot beat the Aerolite 103. That $100 hamburger in a GA airplane that costs $50 in an LSA need cost only $10 in the Aerolite and your wide-open view of the landscape is nearly untouchable by any other aircraft. *** The only criticism I’ve heard for this aircraft is that it is built lightly and may not take repeated pounding by student pilots. That Aerolite is built lightly is obvious; it makes Part 103’s tight weight limits. In my flight experience with the Aerolite, I found it to have excellent behavior that suggests “pounding” is something an experienced pilot won’t (or at least shouldn’t) do. *** I am more than pleased Terry Raber has returned to producing the Aerolite 103. If you want to fly for fun and do so economically, I advise you get in line early. If Terry doesn’t stay busy building these birds, it will be a complete mystery to me. Even with more than 350 aircraft in my logbook, Aerolite 103 is one of my favorites. Maybe it could be yours?