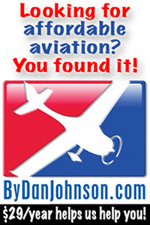 I consistently promote that this website focuses on “affordable” aircraft. I used quotes because affordable literally means something different to every single individual. None of us has the same budget and our financial picture can change tomorrow.

At AirVenture 2021, I interviewed Ron Jones of Thunderbird Aviation about a two-seat Hiperlight he displayed in the Fun Fly Zone.

The design by the Sorrell brothers has been around for decades but not until now has it been available as a ready-to-fly SLSA. In truth, it’s still not available but Ron said, “It’s coming” and it could arrive in time for the 2022 recreational flying season.

Back in the ’80s, the Sorrells set out to create Hiperlight as high-performance aircraft using relative low horsepower. 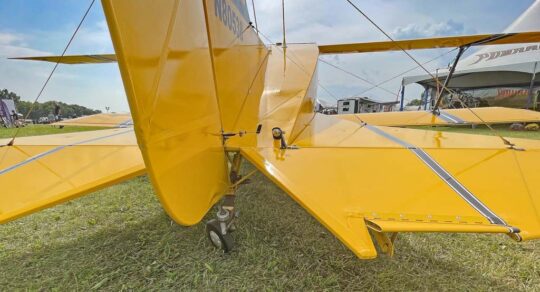 The “lifting body” shape of the Hiperlight fuselage can be envisioned in this view as your eye follows the curvature of the cockpit to a tapered finish.

Thunderbird Aviation was established officially in 2002 when Ron reports being “lucky enough to stumble across a tiny ad in one of the aviation trade journals. They were advertising the sale of the tooling and rights for the Hiperlight.” He went for it.

A decade later, in 2013, Ron continued, “Rights and tooling became available for the Hiperbipe, which was originally designed in 1975 as a fully-aerobatic, cabin-class biplane. It filled out our product line.”

The Part 103 vehicle entry, SNS-8, works well on only 28 horsepower to carry 500 pounds gross weight. “It meets the requirements of Part 103 to be a legal ultralight vehicle,” said the company.

An SNS-9 two-place Hiperlight was designed to accommodate a 65 horsepower engine, which “provides excellent short field performance, while at the same time making it a viable cross county machine.” 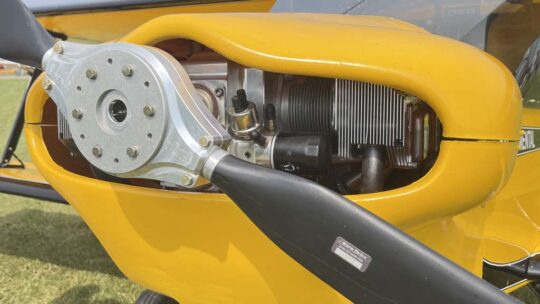 For the Special LSA version of SNS-8, Thunderbird will provide the Jabiru 2200, an 81-horsepower, air-cooled, four-cylinder engine that operates at revolutions familiar to GA pilots.

Finally, “the SNS-7 Hiperbipe is the fire-breathing big brother of the SNS-9,” said Thunderbird, adding that SNS-7 was designed to compete in the sport aerobatic class, while at the same time being a comfortable weekend or cross country aircraft.

Observe that the relative position of Hiperlight’s two wings is different than most biplanes. Most designers have placed the upper wing forward of the lower wing. Contrarily, “SNS” stands for Sorrell Negative Stagger. As you can see in these images, negative stagger certainly aids forward visibility while requiring less structure to attach landing gear, among other benefits.

Other than the number of seats, all SNS models bear a remarkable resemblance incorporating as they do a “lifting body” fuselage. The nearby aft view highlights this visually.

The two-seat SNS-9 is presently available in basic kit form, which requires the builder to do 51% of the assembly. This has been the case during all of Ron’s two decades of representing this design. “Soon we will be offering them fully assembled and ready to fly,” he added on the company website. A basic kit starts at $35,900 but it gets much more interesting.

Prepare to Be Amazed

In the interview, as you can hear for yourself, Ron is suggesting that Hiperlight as a Special LSA for (that is, fully-factory-built) could sell for a target of about $65,000. To fully appreciate that number, let me take you back in time. 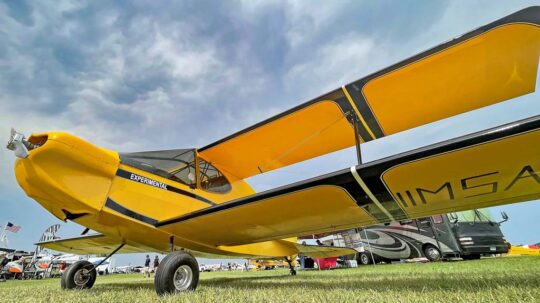 Enhanced forward visibility plus simpler structure to carry gear loads are benefits found when using negative stagger for the wings as seen in this view.

In 2004 as the rule was announced, speculation was high that special Light-Sport Aircraft could or should sell for $50-60,000. Today, I hear people lament all the time that such a price cannot be found.

In truth, that’s incorrect today. You can find aircraft that sell for that number or less but what you find at that price may not be what you want. I’m thinking of several weight-shift trikes or powered parachutes that sell for roughly those numbers ready-to-fly. However, fixed wing choices are also available and a growing market of used LSA are much more affordable.

However, we cannot ignore what has happened to the purchasing power of your dollars in the past 17 years. Let me do the caluculations for you. Assuming you accept the government’s CPI as an accurate gauge of inflation, what $60,000 bought you in 2004 will take $81,000 today. Essentially, for you to go buy things you want, you’ll spend 35% more dollars to buy the same items. You know this from your own daily purchases. 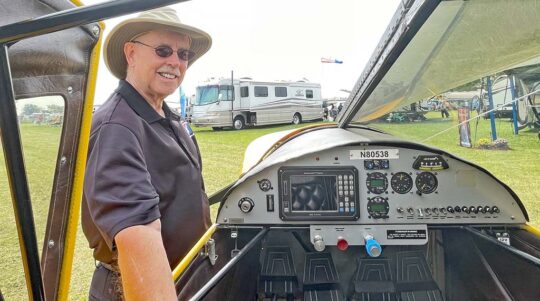 Therefore, Hiperlight, if it truly comes to market at $65,000, is actually cheaper than we expected in 2004… quite a bit less, actually. I find that amazing even as I acknowledge that $65,000 may not be “affordable” for everyone.

Please allow me to draw your attention to a request from AOPA president Mark Baker asking for your help in fighting FAA’s misstep over flight training. As this can tremendously impact training in Light-Sport Aircraft and experimental kits, this matter is critical. Please read and act if you believe FAA must change their position. …and THANK YOU!

Note: Links appearing in the letter below are reproduced for you after the letter. 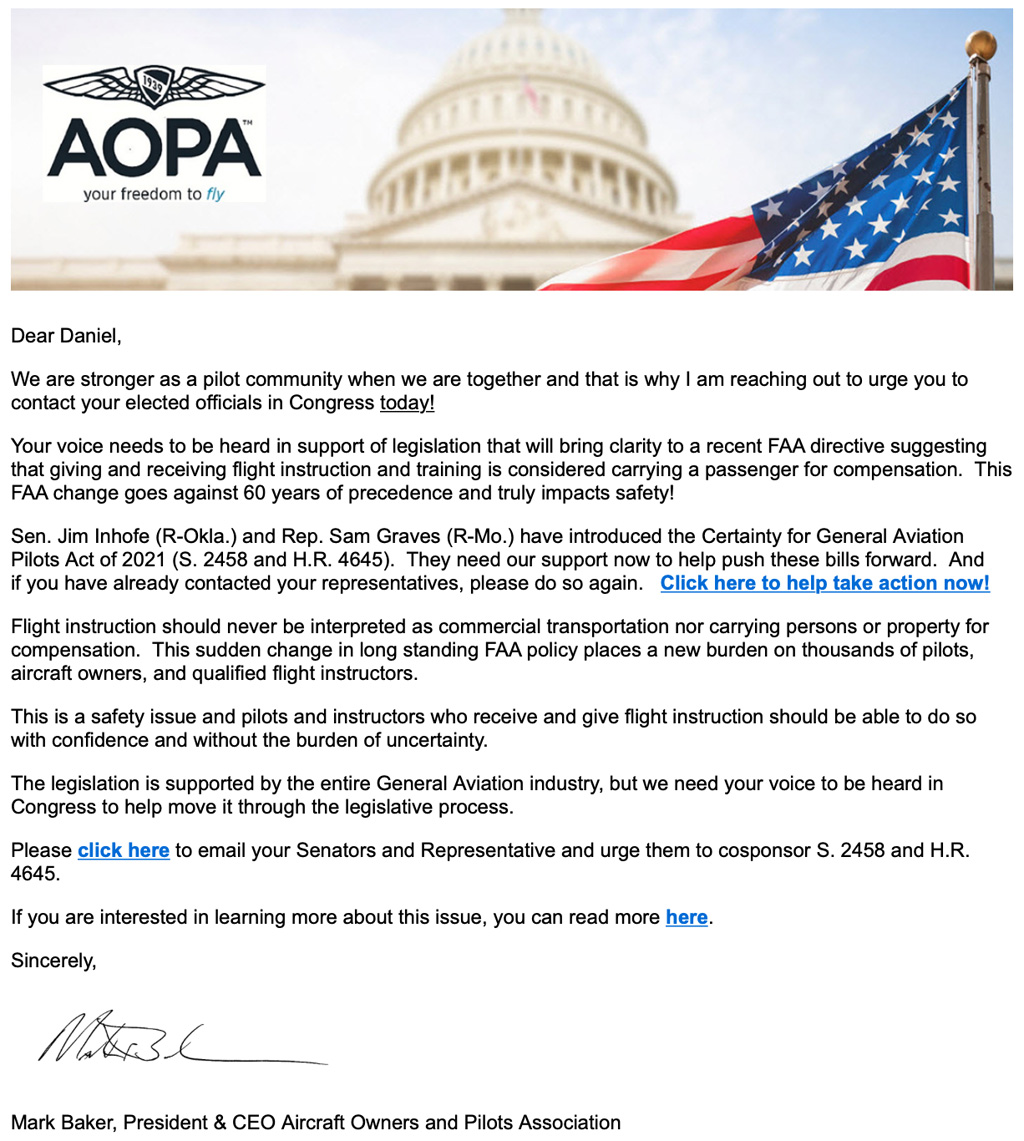 Please use these links to…