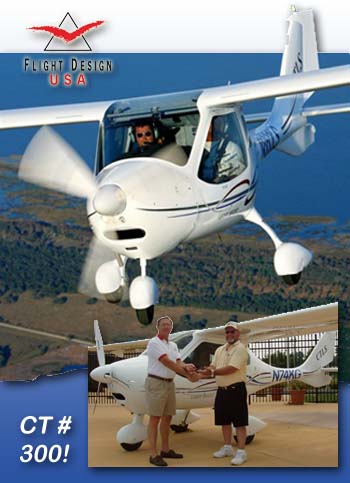 Sales are subdued all over aviation but it isn’t stopping the top performers in the Light-Sport Aircraft marketplace. As our last market share update illustrated, Remos, Tecnam, SportCruiser, and Jabiru have all done reasonably (or very) well in the last 18 months. Always among those contenders is longtime market share leader, Flight Design. *** Just a couple days ago (photo), eastern distributor Flight Design Mid-Atlantic delivered CT#300 to owner Kenneth D. Griffin of Southampton, New Jersey complete with his personalized tail number (N74KG)… interestingly, CT#200 also got a call sign identifying its owner. *** In the Something-for-Nothing Department: Flight Design will be giving away the first MC at AirVenture when EAA completes its 2009 Sweepstakes and awards some lucky person a brand-new design as well as a brand-new airplane. Big flight school and mail order house, Sporty’s, is giving away a 2010 Cessna Skycatcher. Want a low wing? Enter the Get-a-Gobosh sweepstakes in Pilot magazine. Plus a rumor is circulating about another LSA giveaway from a major player. Sounds like at least four lucky people may become an owner of a $100,000+ LSA for nothing. Who couldn’t like that in a down economy?