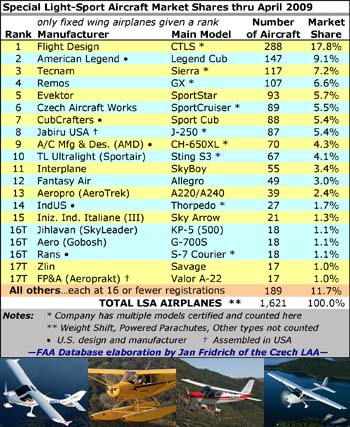 Though a few other brands (Evektor, CZAW, CubCrafters, and Jabiru) are closing on the 100-airplanes-registered benchmark, the four brands pictured above constitute the only triple-digit sellers and have 40% of all SLSA registrations. LSA performance in 2009 got closer to general aviation deliveries as the GA piston market sunk by a very steep 55% in 1Q09.

We continue to see the effects of the last year of economic turmoil in Light-Sport Aircraft market shares. The chart accompanying this SPLOG tells the numbers as always presented, with total market share since the first deliveries in 2005 based on carefully-reviewed FAA registration data. The top twenty (of 70 total) producers still represent almost 90% of total SLSA registrations. For the record… registrations on FAA’s database are not the same as sales. Aircraft can be registered and not sold. Aircraft can be identified as sold yet no longer registered, for example, if removed from service due to a non-repairable crash. To get some idea of the work my associate Jan Fridrich does to collect this information, go look for yourself at FAA’s database. *** Remos continues its solid 2008 performance despite the troubled economy. In the 16-month period since January 1, 2008 the German brand is the leader with 73 units registered, followed by familiar names, in order: Flight Design 62; Tecnam 49; Czech Aircraft Works (see below) 44; Jabiru 32; American Legend 27; AMD 23; CubCrafters 22; Aeropro 14, plus Evektor and TL Ultralight at 12 each. These 11 brands registered 74% of all new SLSA airplanes. *** One of the largest business developments since Czech-based Fantasy Air went down is the change of ownership at the maker of the SportCruiser. Formerly Czech Aircraft Works (CZAW), the company is now called Czech Sport Aircraft. New operators state they will support the fleet of 89 models flying… half of them delivered in the last year. Meanwhile, Fantasy Air importer Doug Hempstead reports he expects U.S.-based production of the Allegro to start later this year.