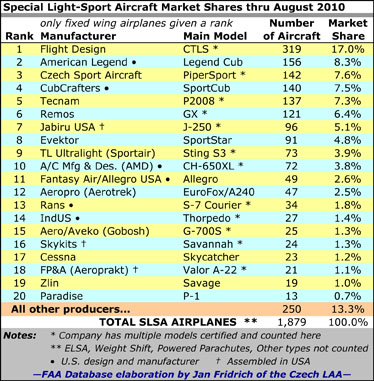 Perhaps you’ve noticed we have not been reporting market share information as often as we once did. Two reasons: (1) the market has matured, meaning the leaders are distancing themselves from niche producers and the rank positions aren’t moving around as much; (2) in the economic doldrums, the numbers simply haven’t been changing as quickly. *** But since the last report, some action occurred that shines a spotlight on an expected development. The aviation Big Boys are climbing upward… Piper advanced into the #3 spot, pushing also-strong CubCrafters down a notch. The legacy Florida company is closing on #2 American Legend. Secondly, while still well down the chart, Cessna moved up from #20 to #17 enroute toward the top. Based on the company’s reported 1,000+ orders, it seems only a matter of time before they outrun everyone. Or, will they…? *** Nothing is sure in business (or economies, it appears). And several LSA producers have been nimble, adding new products, building new dealer and flight school networks on a steady pace, and notably, not having to carry old baggage. *** Indeed, at least one producer (who must remain nameless) said a post-Oshkosh uptick in orders can very likely be attributed to Cessna’s growing Skycatcher fleet. The theory is that when Cessna (and Cirrus) first announced LSA projects, the existing LSA market benefitted from the validation this represented. Cessna studied long and hard and concluded, “Yes, we are sure a market for a Light-Sport Aircraft exists.” *** Then quite of bit of time passed and we saw no Skycatchers except as part of the company’s airshow displays. That’s over. Cessna is shipping. This may help other strong players as customers signal growing acceptance of LSA. *** Perhaps it’s the impending U.S. elections or a drop in jarring news headlines, or whatever… but the LSA market appears to be showing life, and a good bit of the movement is from those Big Boys in aviation.