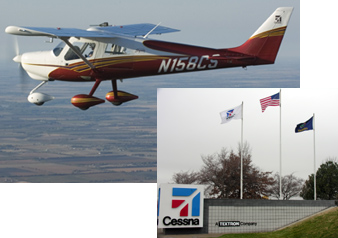 After engineers were satisfied with initial flight results, the proof of concept Cessna LSA has accumulated more than a dozen flights and continues its remarkably fast development.

Yesterday, I paid a visit to Cessna Aircraft and was generously hosted by John Doman, their VP of worldwide prop aircraft sales, Roger Martin, director of prop marketing, and Darren Jones, one of Cessna’s LSA Core Team members and a principal author of the business case being prepared to show Cessna and Textron management why proceeding with the LSA is advised. Leaders are still grappling with several challenges but one aspect has been confirmed. Through potential customer research and by talking to their 400 Cessna Pilot Centers and their dozens of STAR dealers, Cessna has become certain of the market for an LSA. You may already be convinced of this but the world’s largest airplane builder has data to prove their conclusion…such as 3,300 qualified customer surveys from those distributed at EAA AirVenture Oshkosh. We were also given a tour of their jet manufacturing in one of the largest buildings in the state of Kansas. In addition to lots of prop planes, Cessna leads all companies in bizjet production, putting more than 300 a year out the door.