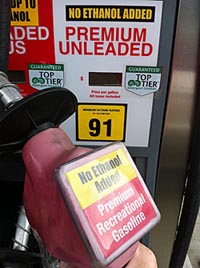 This pump at a Wisconsin Qwik Trip already serves the non-aviation market for “E0 fuel.” 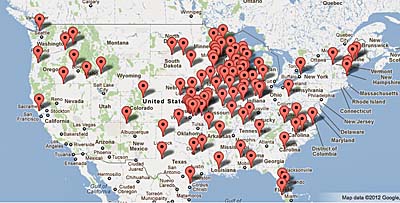 Looking for MoGas for your flight to Sun ‘n Fun, Oshkosh or another event? Check this interactive map.

AFC observes that airports or other enterprises can buy turn-key fuel stations from U-Fuel.

“Things are really popping with autogas,” said Kent Misegades, one member of a group trying to assure more LSA-friendly fuels (like zero ethanol or E0). Though the new Rotax 912 iS can handle ethanol, it truly loves E0 and many experts say it runs more powerfully and cleaner with such fuel plus wear and tear is reportedly reduced. Another big plus is that such fuel is significantly cheaper than avgas like 100LL. *** Kent reported that they found a new supplier in California resulting in the Santa Rosa airport beginning to sell it. “With the recent rise in avgas prices and the latest news of the Friends of Earth lawsuit against the EPA, my inbox is full of requests for help to get autogas,” added Kent. “Todd Petersen is even busier with autogas STCs, which have been selling well in recent years.” *** Kent further described the benefits “As LSA owners know, autogas is not only an excellent fuel for the engines that power the vast majority of light aircraft, but it is the only affordable, lead-free, FAA-approved aviation fuel we have in any quantity. Despite FAA’s continued insistence on a single, drop-in, one-size-fits-all unleaded replacement to avgas, pilots and airports across the country are working on their own to add autogas as an option.” *** Expected rises in avgas prices paired with renewed efforts by environmental groups to reduce aviation use of leaded fuel has increased interest in autogas, judging from the frequent requests for assistance that the directors of the Aviation Fuel Club (AFC) are receiving. *** AFC Director Dean Billing recently added an interactive map (see nearby map with link) to his web site showing the location of all public airports selling autogas. Further details on these airports can be found at his FlyUnleaded.com site. Note that like the list of gas stations selling ethanol-free fuel (Pure-Gas.org), Dean’s list of autogas sellers gains accuracy as users contribute their local knowledge. AFC asks pilots to use this form to update information about E0 sources. “Please help tell us if you have fuel outlets in your area not shown on this list and map,” added Misegades. |||| Going to Oshkosh? — AFC, with assistance from fuel system maker U-Fuel and autogas STC owner Petersen Aviation, is organizing an event this summer called “Unleaded to Oshkosh” (U2OSH) to promote the use of autogas and demonstrate that a grassroots effort of pilots can make important reductions in the use of leaded fuel while also lowering the cost of flying. Details on U2OSH as well as other topics related to aviation fuel may be found in the March issue of the AFC Newsletter. To receive these regularly, all pilots are urged to join the AFC, which costs nothing. AFC has been endorsed by this website, the Light Aircraft Manufacturers Association, and leading LSA manufacturers.

In a related note, Kent said, “I was in Wichita, Kansas recently, where I spent the day with Todd Peterson visiting AirPlains, the company that is commercializing the ADI water injection system he developed some years back. With ADI, virtually any piston engine will run with 91 octane autogas.” So those who think E0 won’t work for them may need to think again.