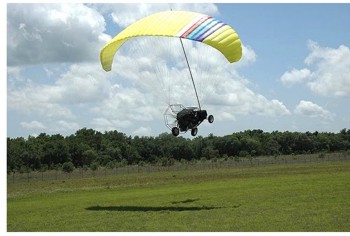 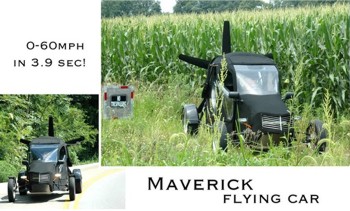 The dark horse, literally, to claim the Flying Car throne is the all-black I-Tec LSA-certified Maverick Sport. *** We’ve talked about it here a lot, and now the “airable” dune buggy seems to really be catching on with the public. *** I-Tec turned the flying car concept design on its head by designing a lightweight off-road car first: the ability to fly it was always the 2nd priority in the design phase. *** The result is a lightweight, off-road-sturdy, flying car that will — and this is straight from I-Tec’s Steve Saint — accelerate from 0-60 mph in 3.9 seconds. *** Holy flying Jaguar XKE, Batman! *** To prove it’s road chops, Steve and the I-Tec crew drove it 1,500 miles to Oshkosh last summer with the paraglider-like wing tucked into its roof pouch. *** In a preview of the 18-hour days they would face while swamped by a fascinated public at Airventure, the crew never made a fuel stop en route that took less than an hour — everybody had to know everything about the Maverick. *** Production, which can now go forward since Maverick has gained SLSA status, is scheduled to begin by AirVenture 2011. There would seem to be no shortage of orders to address the cost of tooling up, either… manna from heaven that most LSA manufacturers wish would come their way. *** Now, EAA announces that its video, put together by Brady Lane from footage partially shot by I-Tec during its trek from Florida, has received more than 1 million hits! *** You can see the video and several more on the Maverick video page. Interested readers can see more photos. *** And you can view a CNN video. Yep, even the MSM (Main Stream Media) is in on the action. *** Is there a lesson here for airplane companies? I-Tec has proven that money spent innovating rather than big-splash marketing can payoff in a more reasonable cost ($89,000 for the Maverick), and people will still beat a path to your door. *** I’m hoping to fly it next month around the Sebring LSA Expo. *** Here are a few more details: *** speed 0-60 mph in 3.9 seconds (just had to say that again)top speed above 95 mph (they haven’t driven it any faster but it’s got plenty muscle left) the 27 foot high structural mast keeps the ram air wing off the ground and helps with crosswindsmast also good for multiple takeoffs and landingsDual Drive System with one engine and two drive systems is patentedprop drive will also be ideal for water (on pontoons, like a swamp boat) and ice/snow (skis?)in-flight operations in the 40 mph rangeMiles per gallon: 25-30 highway. And it burns car gas, not $5/gal avgas.landings and takeoffs in football field length…with enough altitude to clear the goal posts!created to support I-Tec’s mission to help people in roadless remote and jungle habitats, where raw survival can literally depend on the ability to fly.FAA classifies Maverick as a Powered Parachute Itec has tested early prototypes in African and South American frontiersSteve Saint likes to tell the oglers, “If you can drive a car with an automatic transmission, you can fly this.” *** Of course, it requires full Sport Pilot training, but I’m eager to see just how easy it is to fly — and drive. *** The company may subcontract the commercial side of Maverick production. *** “We hope to get the cost down,” says Steve, “to better serve the humanity missions market: that’s our primary goal.”