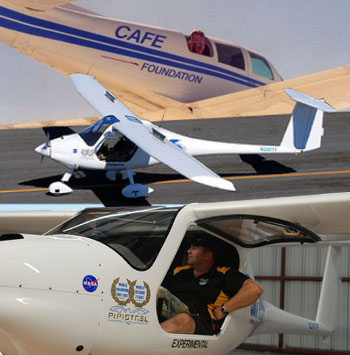 Amid furious preparations for Oshkosh, CAFE Foundation, the efficiency folks, announced teams that will vie for a second year of prizes. CAFE has a $300,000 purse thanks to their partnership with NASA, which is celebrating its 50th Anniversary in 2008. *** It may not surprise you to hear that four of five teams entered will fly Light-Sport Aircraft, and at least one is sure to end in the money as one prize ($10,000) is for “Quietest LSA.” Other prizes are a maximum of $150,000 for lowest community noise; two $50,000 prizes, one for “Green,” another for safety judged by handling qualities; a $25,000 speed prize; and four $3,750 “Showcase Prizes” covering quietest cabin, best angle of climb, shortest takeoff, and best glide. Winning a couple of the larger prizes is enough money “to actually buy someone their own LSA,” said CAFE President, Brien Seeley. *** The teams competing will fly a Pipistrel Virus (last year’s big winner of $165,000!–photo); a modified Diamond DA20-A1; a Dynamic WT9; the UFM-13 Lambada, and a Flight Design CTsw. Despite doling out NASA’s money, CAFE itself receives no funding from the space agency. A $4,000 entry fee covers some costs. The competition will occur after Oshkosh at CAFE’s Flight Test Center in Santa Rosa, California from August 2-10, 2008.