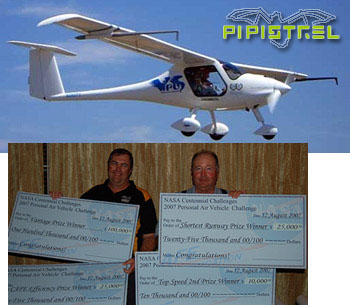 We’ve all heard the line: To make a small fortune in aviation, start with a big one. Yet thanks to Comparative Aircraft Flight Efficiency (CAFE) Foundation and NASA, the laws of gravity seem reversed. A Pipistrel Virus (say: “VeerUs”) went home from the Personal Air Vehicle (PAV) Challenge event with four checks totaling (are you ready for this!?): $160,000. The money represents the biggest share of $250,000 awared for this first year of five contest seasons. Australian pilot and LSA businessman Michael Coates flew a modified version of the Pipistrel Virus owned by Vance Turner (photo, on right) of Rescue, California. Lots more details are available; read the rest of the story. *** Virus, sibling of the motorglider Sinus. (“SeenUs”), took the best overall prize ($100,000); efficiency ($25,000); short runway ($25,000); and second place in the top speed prize ($10,000). An RV-4 took noise ($50,000) and top speed ($15,000) and a Cessna 172 won the $25,000 handling qualities prize. *** The PAV Challenge is one of seven NASA events aimed at stimulating rapid innovation and progress by offering substantial prize awards, kind of an X-Prize for efficiency.