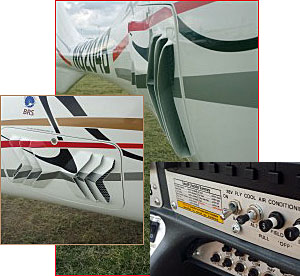 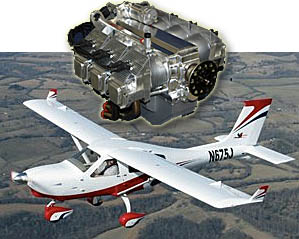 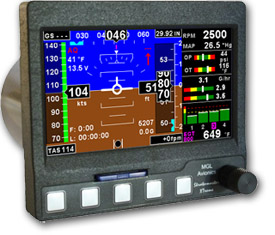 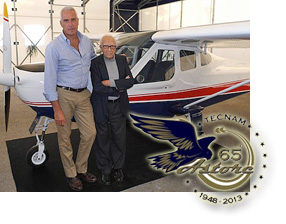 Cool It! — Scott Severen of US Aviation — the central Texas general aviation dynamo — is a man on a mission. He showed an AMT FlyCool installation (video) on a Flight Design CTLS at Sun ‘n Fun that was a surprisingly clean installation considering he brought all the air conditioning parts in his airline luggage. By AOPA’s fall Summit, he had refined it considerably (photo). Now the installation features a handsome louvered right side baggage door that brings fresh air in and exhausts warmer air. The panel switches are permanent and in the warm Texas sunshine, the system had great appeal. It adds surprisingly little weight (22 pounds); cost varies by installation but is much less expensive than old style air conditioning systems for airplanes. One downside is a loss of some luggage capacity but for example, a flight school wouldn’t care. Their students could chill instead of sweating through their flying lesson. Sunbelt CTLS pilots may also be attracted to the option. Contact Severn or FlyCool for details in your LSA.

Central USA Services — Pete Krotje attended the October ASTM meeting in Jacksonville. He’s one of a few manufacturers that regularly participates in the standards-writing exercises. On a break in those deliberations he educated me on new services his company provides. Notably, Pete has started giving seminars on Jabiru engines, which his company Jabiru U.S. often sells to other airframers. However, the Shelbyville Tennessee LSA producer is also performing repairs and inspections on brands other than Jabiru. Many Light-Sport businesses have weathered the economic upheaval of past years by broadening their service work and Pete is following suit. If your LSA is based in the central states, you can consider using Jabiru U.S. for many general maintenance services. As a company with long experience and having been through the rigors of an FAA audit (to sister company Arion), the Jabiru U.S. folks know how to perform services that fully comply with regulations and standards.

XTremely Small — Dynon has generated strong interest in their tiny D2 instrument that can be attached to the windscreen or side window of any GA airplane as well as used onboard LSA and kit airplanes. It’s small, inexpensive, capable, and because it doesn’t hard mount, can be used on type certified airplanes that otherwise cannot install unapproved instruments. Given that most GA airplanes still rely on steam gauges, no wonder Dynon is selling D2s briskly. |||| Another innovative producer has an equally small instrument but it’s intended to mount in your panel. It is even more capable in some ways. MGL Avionics representative Matt Liknaitzky aided my understanding. “XTreme (photo) is dynamite in a small package,” Matt exclaimed! “It is a full primary flight instrument, with pitot/static (altimeter/airspeed/vertical speed) and full engine monitoring as an option. It also has the option of full AHRS or GPS-derived bank angle. It has a built-in GPS for basic navigation and it will control a Sandia remote transponder.” In the latest news, Matt reported, XTreme has a built-in autopilot; just add servos. The only thing it doesn’t have is a moving map, but besides that it is an impressively comprehensive flight display in a small package and at low cost. “Some people use it as a backup, but many use it as their primary instrument,” Matt added.

Happy Birthday, Luigi! — Arguably the most prolific producer in the LSA space is Tecnam, with several SLSA models accepted by FAA and variations on those models to include the amphibious SeaSky (video), a taildragger, and a 914-powered P2008. The Italian company also makes a twin, is finishing a four seater, and has started work on an 11-seat commuter aircraft called P2012 Traveller. Every one of these designs was created by Professor Luigi Pascale, who recently celebrated his 90th birthday. He is still at work, because as nephew and Tecnam Director Paolo Pascale observed, “It keeps him alive!” Tecnam celebrated Luigi’s benchmark birthday in their Capua factory near Naples, Italy. Luigi Pascale is a significant figure in the Italian aviation industry. With his brother, Giovanni — they are nicknamed Gino and Nino — he built his first aircraft in early 1951, the P48 Astore. In 1957, the brothers created Pascale Partenavia to give birth to a line of airplanes including the Partenavia P68 light twin. In 1968, the two brothers founded Tecnam whose first model was the P92. Also known as the Echo in several variations, the P92 fleet numbers 2,500 units and counts 200,000 hours of flight, reported Tecnam. With his impressive history of creating aircraft, here’s wishing Luigi 90 more years of aircraft design!