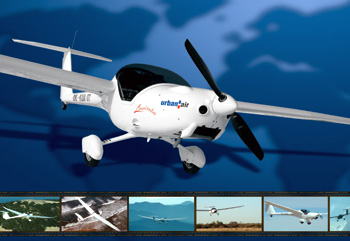 Lambada is a handsome motorglider, about 100 of which are flying around the world. You need to see it to appreciate Lambada’s compound-curved wing. More info: (Eastern USA) email Bostik Industries or call 321-960-3438; (Western USA) contact Flight Design West.

One actually got approved last year, I’m told, but a new 2008 model Urban Air Lambada UFM 13 more recently received its airworthiness as our newest, and 57th, Special Light-Sport Aircraft (SLSA). This is the second aircraft to use the ASTM standards for Glider (see 8/6/07 SPLOG) but is the first motorglider. TST-14 is more properly a “powered sailplane,” a rather fine but clear distinction. Imported by Bostik Industries LLC, Lambada is part airplane and part sailplane. It glides an impressive 26:1 or 30:1 from a 42.65- or 49-foot wing setup (both are standard; you exchange wing tips). Yet using the 80-hp Rotax 912 it will also cruise at better than 100 mph for 800 nautical miles on 26.4 gallons of fuel in two wing tanks. Lambada is a carbon and glass fiber shoulder-wing design available in taildragger or tricycle gear. It also comes standard with a Magnum Ballistic Parachute system, folding prop, stainless steel exhaust, and tinted canopy for $93,500.